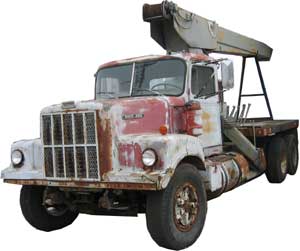 I was waiting for Russ to come home for dinner. And waiting. And waiting. Finally I called him, and he wasn’t coming home because he was trying to move the crane from the front of the studio to the back when it stalled. In the middle of the intersection in the street. So he stayed at the studio until midnight trying to get the crane running again.

It really is a beast of a thing, and especially frightening when it’s stuck in the middle of the street. I have this fantasy of someday getting some spray paint and fixing it up really arty and painting “The Beast” on the side.

Sometimes it’s very interesting being married to a sculptor.