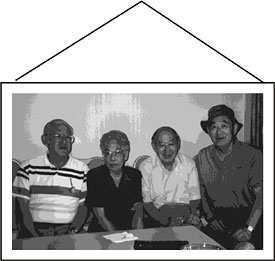 My yoga teacher says that we should dedicate our practice each day to something. Usually I have no idea, but yesterday I dedicated mine to my great-uncle Tomoo.

I learned Tuesday that he died in his sleep. He was the second oldest in his family, my grandmother was the oldest. He, like the rest of my father’s family, was born in California, but was interned during WWII in Arkansas.

Although my grandfather, grandmother, and father stayed in the midwest after the war, the rest of the family returned to California. Uncle Tomoo was a pharmacist, and his drugstore was in the middle of J-town in San Jose. It had a soda fountain and a lunch counter where people would eat sandwiches and hamburgers, or just sit around, drink coffee, and gossip all day.

Uncle To also had a garden in back of his house with a real lemon tree. When I was a kid I always thought that was something magical–since I was raised in the midwest, I thought lemons only came from the grocery store.