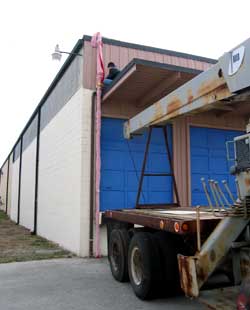 Yesterday was a beautiful day, I went downtown for a while and picked up some of my quilts at the gallery. When I got to the studio, I couldn’t figure out where Russ was. Eventually I found him–up on the roof. He was filling a 23-foot tall pole with concrete for a structural element for a sculpture he is working on. Crazy guy, he had to carry buckets of concrete up there. Maybe I’m glad I didn’t find him earlier. 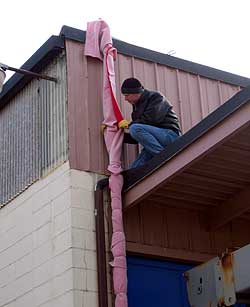 Then today the temperature rapidly dropped, so he was worried that the concrete wouldn’t cure properly. We discussed several ways to keep the pipe warm, and he decided to wrap it in blankets. I helped on the lower parts, but am not too good at climbing on the roof, so I turned my camera to our little studio neighborhood. 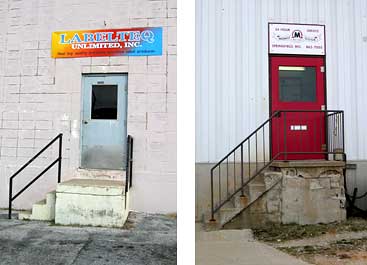 I’d like to say our studio is in a cool location with trendy restaurants, but it’s actually in an industrial area where many of the buildings look like they were built in the 60’s. I went up to several doors, but none of our neighbors seemed to be home — I guess they don’t work on Sundays. 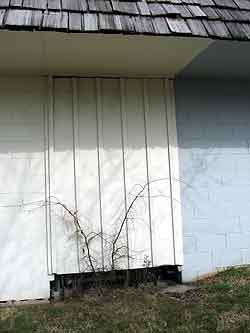 One of these buildings has a big hole under it where a beaver lives. There’s a little creek at the end of our street, and in the summer we watch him waddle up and down the street and then disappear under this wall.

Here’s an attractive truck that is always parked on the side of our studio, but I have no idea who it belongs to. I guess the mobile unit isn’t very mobile.

Another great neighbor. I wonder what they think of us, always carting weird stuff in and out of the studio. I’m not so impressed with them since I know someone who went there when his transmission failed. They told him the guy that fixes transmissions was out of town. That’s when I realized that they’re not really the World’s Largest Transmission Specialists.

Across from the other side of our corner is a huge factory, I could barely get the whole thing with my camera. 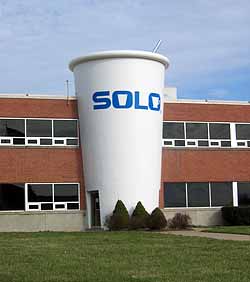 Right in the middle of the factory is a two-story paper cup. Every time another paper cup factory buys this building, they paint a new name on the cup. It used to have colorful swirls on it, but I guess that part got too hard to repaint. One time I did a video animation of a big head in the sky drinking from the straw. 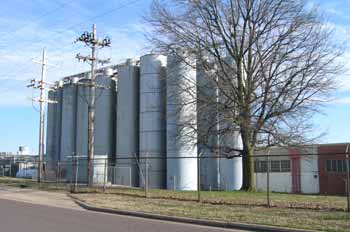 The Solo Cup factory has these huge towers on the side facing my office. Sometimes they make an awful humming noise, so then I go to my studio in the back of our building. I have no idea what they’re doing in there.

Here’s where we used to eat lunch every day, before they remodeled the Catfish House down the street and put in a Subway. The people at Schlotzsky’s are friendlier though, and always ask about the art. They have a chalkboard that has a question every day, and if you get the right answer, you can win a cookie. We’ve won a lot of cookies, especially when they forget to change the question from the day before. 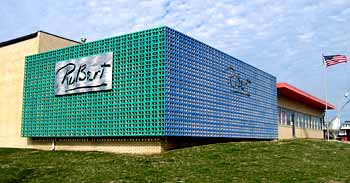 And here we are back at our studio. We painted it bright colors to make it not look so 1960. I wanted Russ to cover up the block on the side with stainless steel, so it would look like a Bork spaceship. But he said that would be hard and expensive. He did put up some nice signs though. 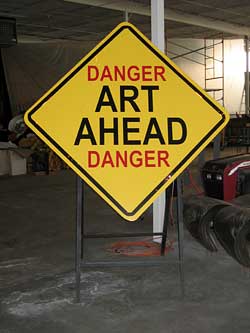 Once in a while, we have an open house or a crazy halloween party. Then we stick this sign out in the front yard to warn the neighbors. For some reason, they never seem to complain that the music’s too loud.