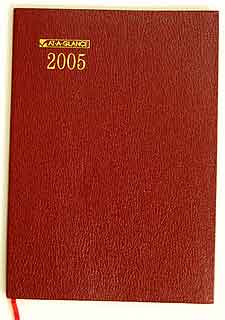 Recently I read a special issue of Time magazine called “The Science of Being Happy.” It was very interesting, several of the articles were about how historically psychologists studied only the mentally ill, but recently there has been more research into people who are not and into the things that contribute to people being happy.We know there is a great deal of evidence that people who think positively are more healthy, but something in the research struck me as new. Several studies compared groups of people who kept a “gratitude journal” with those who did not, or who kept a journal that recorded both good and bad feelings. These studies found the people who wrote down about at least three things a week that they were grateful for were happier, healthier, and more energetic than those who did not.

I’ve always been intrigued by artists’ journals, but never felt like I could keep one because I felt it would sap the creative energy away from my “real art.” But I decided give this gratitude journal a try. 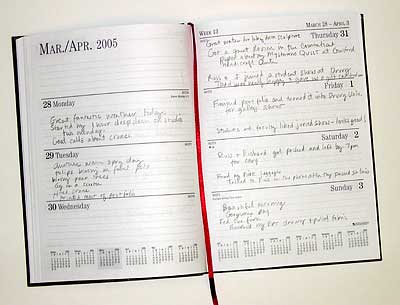 I bought a weekly planning calendar, picking one with only five lines per day, because I thought the limiting structure would help me stick with it. I guess I could make a fancy cover to dress it up, but it’s not necessary — what’s inside is what’s important.

It has been easy to do. Every couple of days, I write a few short sentences in the book. Mostly it’s little stuff, like “I saw a full moon this morning,” or “It was sunny and warm today.” Sometimes it’s goofy stuff, like when I dropped my laptop and it didn’t break, or when I left my purse on a plane and a nice mechanic helped me find it.

Sometimes it’s about something good that happened to someone I care about, and many times it’s something I’ve accomplished myself.

Now I’m feeling better, so has the journal helped? Who knows. But I am going to continue writing in it, and here’s why.

Last Sunday I was feeling kind of down, so I decided to read through the last two months. It was the first time I had re-read any of it, and at first I noticed that each little sentence made me smile.

Then I started to realize that it was filled with special moments of my life that would be forgotten forever had I not written them down. By the end of the last few entries, I decided that I need to fill lots more of these little books, so when I’m old(er), I’ll have shelves full of them.

One thought on “My Gratitude Journal”