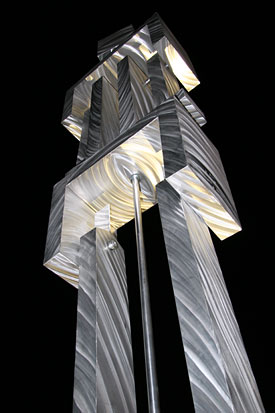 After I got my Viking entry in the mail, I went back to the K-Man site with dinner for the guys and again later to take them some jackets. There is an awesome aspect to the site for the sculpture that we didn’t anticipate.

When the baseball games across the street end, the finale fireworks explode right behind K-Man’s head. I took the above night photo, but didn’t get a good photo of the fireworks when they were exploding I was still driving up the street, watching firey chucks of lava fall on my truck and got a burning spark in my left eye.

I wonder if they’ll quit blowing fireworks inside the city if this happens again? Hope I get a good photo before that happens.

p.s. Had a great meeting of our art group yesterday–some new people showed up. Hope to post those photos soon.
p.p.s. It’s two in the morning, and Russ is still out working on K-Man. I could only hold the flashlight so long, then I took a nap in the truck and came home.