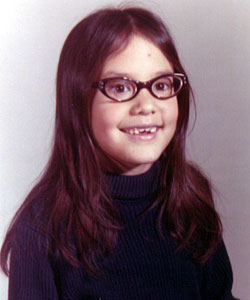 I wore cat-eye glasses in the fourth grade. Boy, does this photo bring back memories. My glasses were so thick that other kids made fun of me — they said they looked like the bottoms of coke bottles (I guess that’s when coke came in bottles).

Notice my early preference for turtlenecks, and the mole on my forehead that I later had removed. Also the fact I was always a late bloomer. I lost my front teeth long after everyone else had grown their permanent ones. 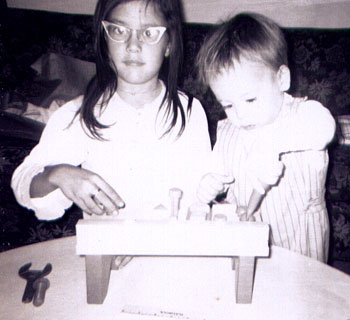 Before that I wore blue cat-eye glasses in the second grade, but you can’t tell since this photo was taken back when most photos were black and white. That’s me with my younger brother Andy…and there’s that mole again. How it haunts me.

Since high school, I’ve worn contacts. But I’ll always think of myself as the girl with cat-eye glasses, so when I needed a new glasses, I decided to return to my roots. 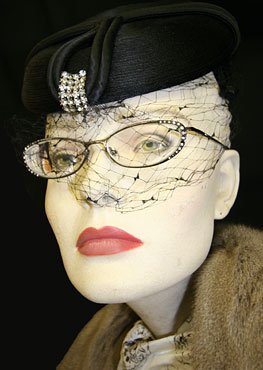 I found these wonderful Lulu Guinness glasses with rhinestones in the corners. I love them, and now they can make lenses so thin, that I might actually wear them in public. Actually, I think they look pretty good on me, but Madelaine is more glamorous than me, so I asked her to model. 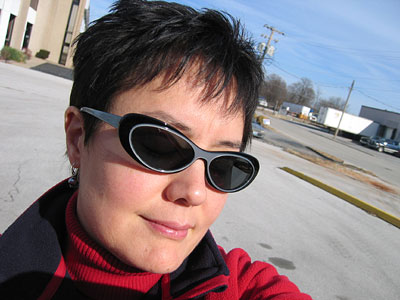 And here’s me today — modeling my Lulu Guinness sunglasses in the parking lot. Typical turtleneck, sans mole. Oh yeah, and I had my ears pierced when I was 35 — late bloomer again…