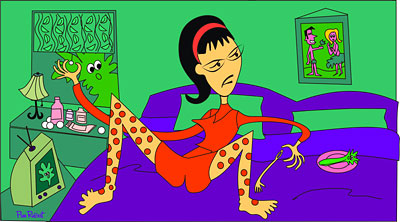 So here’s what I did on the Fourth of July…the fireworks were on my legs, so I sat around and watched them explode into lovely reds and purples. For all my jokes about urban camping, I guess I brushed up against some poisen ivy last week at Mac’s Sculpture Farm near Cincinnati and wasn’t smart enough to wash it off.

This is the worst I’ve ever had, actually got sick and finally went to the doctor. He was very nice and gave me whole sackful of remedies. Now that I’m doped up on steriods, inside and out, I’m waiting for some bulging muscles to appear. Unfortunately my tummy muscle is the only thing bulging so far, probably because when the doc said take the steriods with food, I assumed he meant Egg McMuffins and chocolate cake.

In case you’re wondering about the drawing, it was inspired by my graceful attempts to sleep without my legs touching, the thing looking the through the window is a “shrubbery,” Adam and Eve are unavoidable, the little hand back-scratcher, well just because they’re creepy, and celery – well, last night we watched Wallace and Gromit: The Curse of the Were-Rabbit, and I decided that vegetables can be funny.