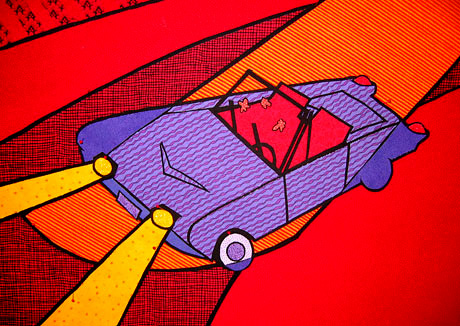 I’ve been driving around for about a week now with a really big bug splat on my windshield — to be able to study the shape and attributes of bug splats, and also to remind myself to put some bug splats on this quilted car. Now that the car and the windshield are done, I guess I can go wash my real car.

I was also thinking about quilting little bugs flying in the headlight beams, then happily found this dotty print that kind looks like dust flecks floating in light. I still might try the bug idea too, maybe just one or two little lonely gnats.

Cartoons requires a sort of logic, which I often contemplate while drawing. For instance, this car is inspired by a photo I found of a convertible Thunderbird from the 60’s. The real car had four headlights, but when I drew them all in the picture, I ran into the problem of how does an old car headlights high-beam look? I got all confused about high-beams and low-beams, so I eliminated one set of headlights. Now the car kind of looked funny in the front, but oh well, I’d moved on…

Because then I realized my original drawing was flawed in another way. If an alien tractor-beam spotlight were directed onto a car, where the light wasn’t, the car would be dark, right? but how to do that in fabric….? My solution was to change to darker fabrics, but I don’t like the way the front tire turned out, so may re-do that.

The reason I choose a Thunderbird is because I once had a similar car. My dad gave me a 1967 Thunderbird to drive to high school, except mine wasn’t a convertible. It was my grandmother’s until it became too unreliable for a grandmother, but not too unreliable for a high schooler. You can see it in this old photo — me with my obligatory 70’s Farah Fawcett hairdo created under the torture of a curling iron, and I have no idea who that little dog is. I loved that car, the inside had all kind of electric do-dads, and it was like sitting in a spaceship. I named her “Bernice,” and all my friends called her that too. 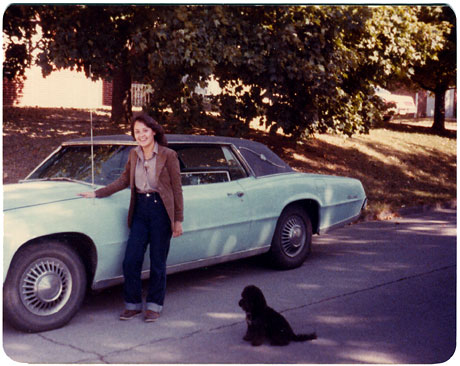 I was wondering the other day why so many of my quilts have cars and trucks in them, then I remembered that when I was growing up, my dad was kind of a car nut. He always had some kind of old vintage car around in various states of restoration. When you’re a kid, can sort of draw and have no money, it naturally occurs to you to draw pictures and give them away instead of buying gifts. So I used to draw my dad’s cars and give the drawings to him, and he had to frame them of course. But my drawings of cars have always looked sort of fat and squatty, like cartoons.