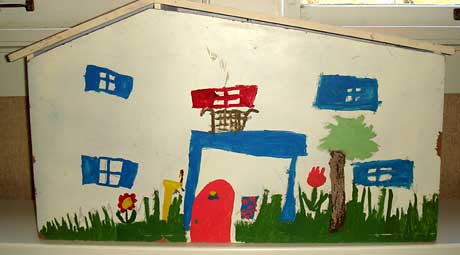 This summer my mom found my old dollhouse in my grandmother’s attic and brought it to me. I had forgotten I ever had this dollhouse until I saw it again, but then a flood of memories came back. She got it on sale for $10 at a department store in St. Louis to surprise me for Christmas when I was a kid. My dad cut a piece of masonite to cover the front, and I painted it — so for the sake of history, this is probably my earliest surviving painting! 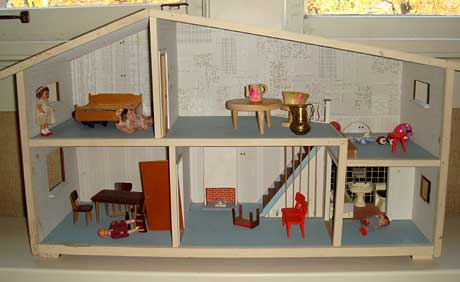 The inside looks a little sad, since a lot of the furniture got broken or lost. But I did clean it up for my niece to play with it when she visits. Someday I’d like to repair or replace the furniture, maybe even make some little art quilts to hang on the walls. I guess this what you call a fixer-upper.

The dollhouse has been in the back of my mind for several months, and so after several sleepless nights trying to visualize my quilts in my upcoming gallery show, I decided to make a gallery dollhouse. 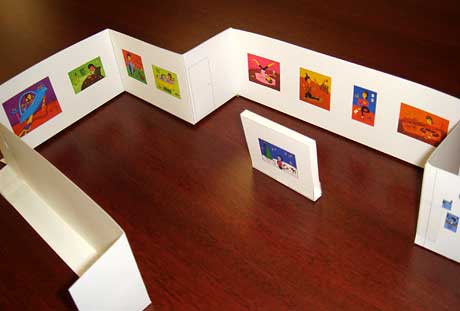 The gallery director had given me a dimensional floorplan of the space, so I drew the walls to scale. Then I imported little jpeg images of my quilts and sized them appropriately in the drawing. I was able to play around with the arrangement of the quilts which helped me a great deal in planning my show.

Then I printed everything at 2% of the scale so that it would fit onto white cardstock in my laser printer, cut out the walls, and folded them into the three-dimensional form. I taped the model to the top of our conference table because it was a color similar to the gallery floor. 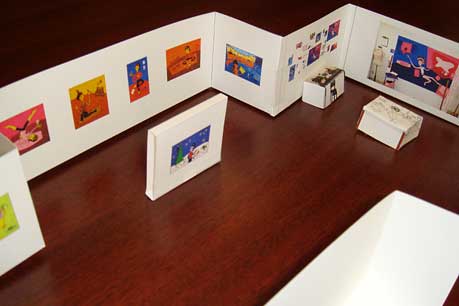 You can see how I can move around, looking at different viewpoints within the minature gallery. Originally I was going to put PaMdora’s studio simulation behind the partial wall, but after playing around with this model, I decided it would better for the Wall of Yoga. Now PaMdora’s studio is planned for the right wing of the gallery, and I’ve set up with director to start that installation first, on Wednesday. 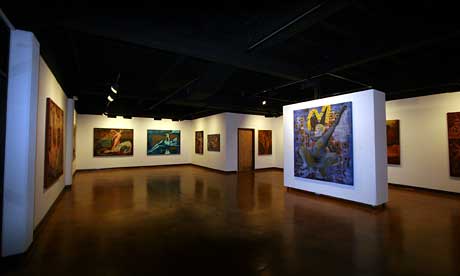 This is a photo of the real gallery with the current show of mixed media paintings by Juan Torres-Zavala. I was a bit intimidated when I walked into to the gallery last week — as you can see he has filled the gallery with a beautiful show. You can also see how my little model relates to the real space. 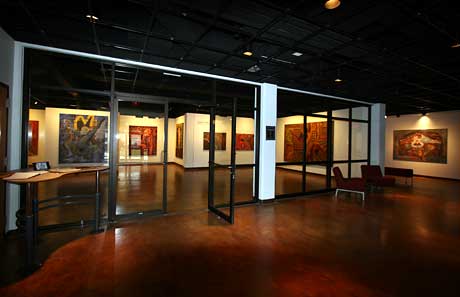 This is the entrance to the gallery. I was planning on putting some of my installation in front of the windows or actually using them to hang something, then I found out that the windows slide open during the opening reception because there’s usually a big crowd. Torress-Zavala actually had so many paintings that there are several exhibited in the outside hall (which looks like gallery space too.)