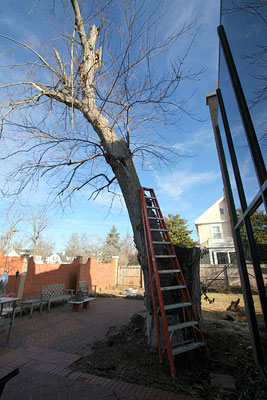 Humans weren’t the only people who suffered in the January 2007 ice storm. I think a lot of wild animals struggled too. Yesterday I saw a disoriented racoon sitting in the middle of the road in the bright daylight, so I imagine he was sick or hurt. And in our own yard, there has been lots of ruckus in the old squirrel tree.

Sometime during the storm, the big north branch crashed to the ground. Then third-story squirrel apartment broke and fell over. Next there was lots of activity in the second-story apartment, and Russ said he thought the squirrels were adding a extra bedroom for their third-story relatives. 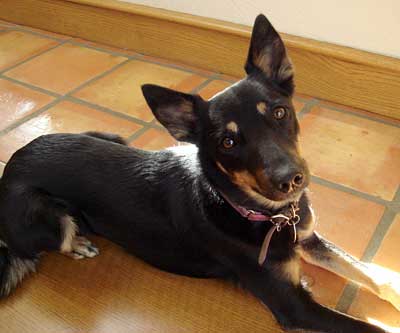 Now that we’re cleaning up the yard and trimming the trees, I know a professional arborist would say this old tree has to go — it’s in too bad of shape to save. But can’t you just see it in Mochi’s eyes, she’s saying,” Please Dad, save the squirrel tree. I won’t have anything to watch all day long if you cut it down.” Honestly, it is better than dog TV.