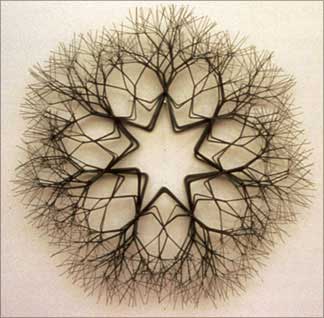 I’ve been studying the art and life of Ruth Asawa, a Japanese American artist who among many other things, crocheted and wove beautiful sculptures out of simple wire with her fingers.

You can read my essay on her life and art that I wrote last night for my first contribution to the Ragged Cloth Cafe art discussion blog. What I didn’t say in my academic approach for the RCC, was my personal reflections on this artist’s life story.

In my research, I found that at age 16 she was interned in the same Japanese American internment camps that my grandparents were sent to during World War II — first the temporary housing in horse race stables in California, then one of umpteen permanent camps spread throughout western and midwest U.S. This was something that happened to people of Japanese heritage living on mainlandÂ  US. because of racial discrimination and war hysteria, regardless of the fact that many were U.S. citizens.

Asawa and my family happened to end up in the same camp at Rowher, Arkansas. I once tried to find the remains of this camp a few years ago but nothing was left. My family never says much about camp — my father was too young and my grandmother had the common Japanese attitude of shigatakani… and so it goes.

I once asked her what they did all that time in camp by the cypress swamp that smelled of rotten eggs, and she said, “oh, taught each other things, like ikebana.” (Japanese flower-arranging). “Of course,” she said, “There were no flowers in Rowher, so we used what we had, sticks and mosses.”

13 thoughts on “Sticks and Mosses”