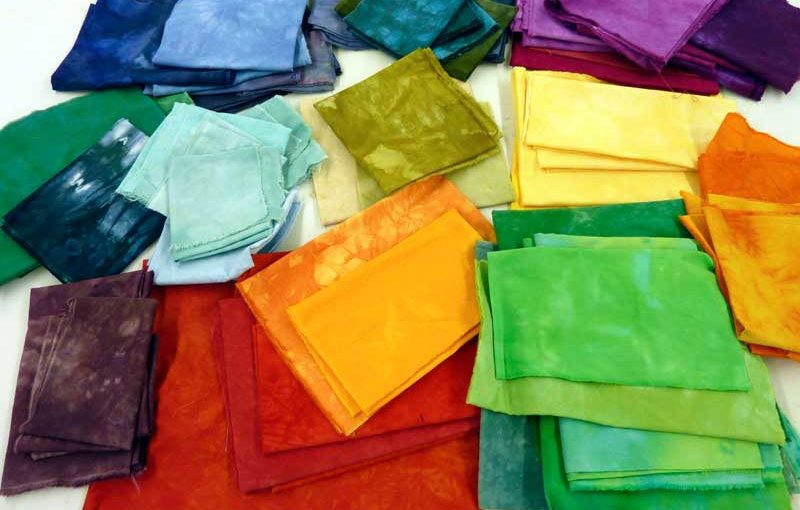 I’d forgotten how fun this is — dyeing!

All summer long I’ve been fighting the heat, coming up with different strategies for working in my non-air-conditioned studio very very early in the morning and developing satellite work locations and making smaller projects on the go.

Then I finally remembered that turning up the heat is good thing for dyes. I had a lot of old supplies – dye powders, soda ash, etc. in the back of my studio from some previous dye adventures. It was merely a matter of cleaning up the shelves, re-organizing, and I also started finding lots of little stashes of un-dyed fabric, or fabric that totally needed a color makeover. And those little stashes added up to to a lot of yardage. Yay, I didn’t even need to order any supplies, and since I’m in the recycle as much as possible mode right now, last weekend’s project fit right into that philosophy. 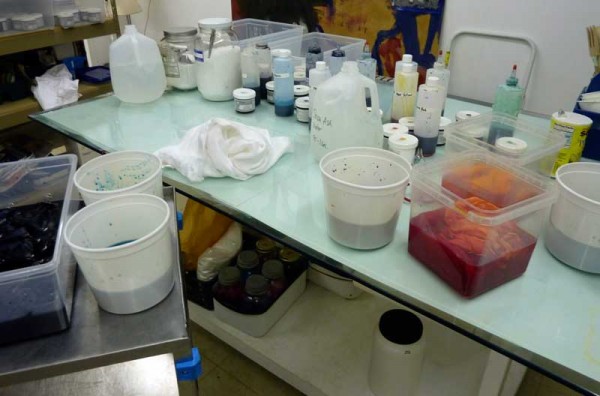 Mixing up the dyes reminded me a little of being a kid and making blue animal pancakes with my brothers, or the times when I was just playing Humbug Witch in the kitchen and not trying to come up with anything edible, merely something explosive. So this train of thought led me to realize that Mad Scientists are not really Mad in the bad temper sort of way, but in a crazy off-the wall way. Kind of like the blue guy in Megamind – what a great animated movie. 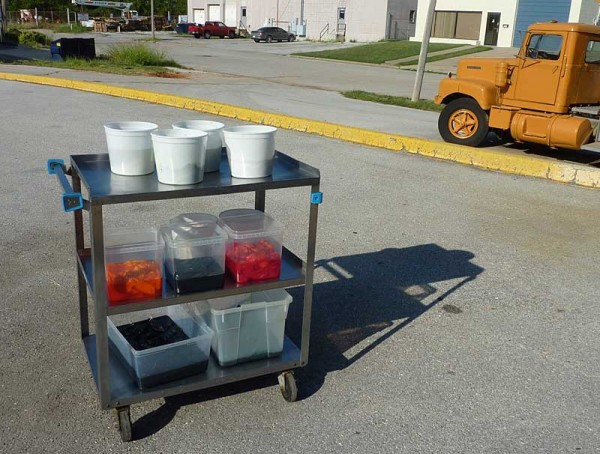 What’s different about now as opposed to a couple of years ago, I realized that I needed more darks, lights, and odd ones. I have a great stash of brights, but most of my recent work has been done by using patterned fabrics that from a distance, create complex colors. Currently I’m working a series of non-figurative pieces and need more depth in my solid color options.

Following Ann Johnston’s Color by Accident book in my first batch, the darks weren’t dark enough. So the next day, I re-read Lisa Call’s methods, threw in a little salt, left the fabric in the sun out on the back parking lot for a few hours (not the cart though, because salvage bandits will take anything metal in a heartbeat), and then didn’t wash out the dyes until later the next day. The second day batches were much better, and although it was hard to wait, it was worth it.

6 thoughts on “Why do they call Mad Scientists Mad?”