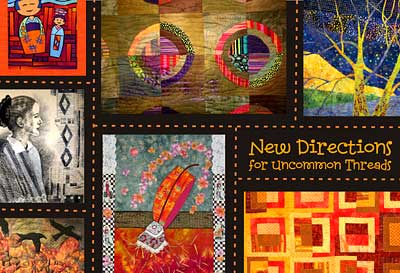 Sometimes when you don’t work for a while and then you come back, things just fall in place really easily. We need to have a postcard design for our upcoming group museum show in April. I was going to just send the museum some single images and let them pick. But a single image wouldn’t accurately portray the variety in the show. Then I had this idea, and it came together fast.

My idea is that you’re not seeing any one full image — you have to go to the museum for that. The images run off the page in every direction because we’re all going in individual directions. But the images are “stitched together” kind of like quilt blocks just as we are individuals sewn together into a small community of artists.

“New Directions” because we’re all pushing and experimenting, moving in new directions. But we’ve all supported and helped each other do this, so the dotted lines are also like pathways that meet and cross. As I looked over the list of submissions for the show, I realized that most all the work has been done in the last year. At each monthly meeting, I’m astounded at the amount of artistic growth each of us has made in a relatively short time.

Emmie helped me with the title, and she says she’s going to make this her desktop background. I think it would make a good book cover too! Well, we can dream, can’t we? 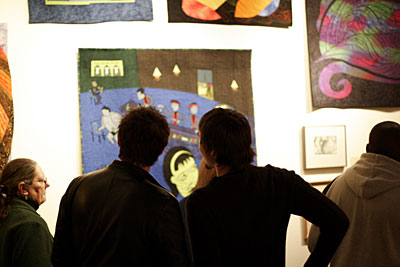 The First Friday Art Walk fell on February 4th and on the second day of our show. Actually this was planned. I’m still wondering about the timing, but still think it was good to have the Artist’s Reception the night before. Although most of the out of town artists couldn’t stay over for Friday, I think it was better to have two nights of events to help build the buzz.

Things started early, the director of the art museum always hits events early, but through the night, I heard he was sending people in off the street to see my Sushi quilt. Above you can see a couple of young guys studying it. Wonder what they’re thinking? 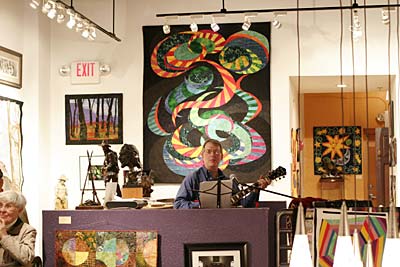 On Friday we also had live music, as most of the galleries do wine, food, and some do music to try to spice up the event. Behind the musician is one of Lucy Silliman’s monster quilts. (my term for big) 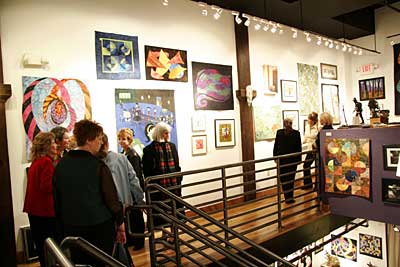 Throughout the night I heard many wonderful things. That the display was arranged nicely to draw people through the exhibit. That the art made people smile. That it was one of the most interesting gallery shows in Springfield ever!

The head of the art and architecture department at Drury University even asked me to do a solo show at the new Pool Art Center next year. How exciting and terrifying! But I’ve already thought up a name for it… 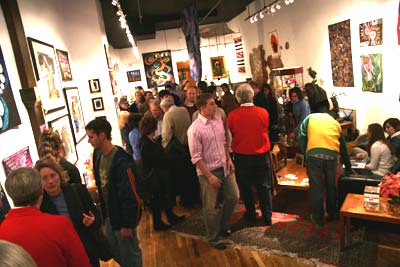 I can’t list all the people who came, but I’m so grateful to everyone who did. In the center of the photo is the Mayor. Of course, I take yoga at 6 am with him and his wife in the basement of his downtown law building so I’ve been SUBTLY reminding them for a month to come see the show. He’s talking to our city manager who is ecstatic about the crowds downtown that night. We also had many family, friends, artist pals, art profs, business friends, kids of friends, twenty-somethings, and bar flies….

One woman even showed up with her work in progress. She had read the article in the paper and wanted to show me “Pies and Pets,” a self-portrait of herself with the title embroideried right on the quilt. Well, that’s not so different from what I’m doing, is it? 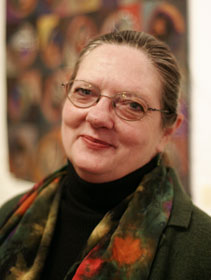 I wish I had thought to have Russ get a portrait of every artist in the show. Here’s a great one of Susan Leslie Lumsden in front of one of her quilts. She’s also having a solo show at City Hall this month, so we’re really saturating this town in fiber art! 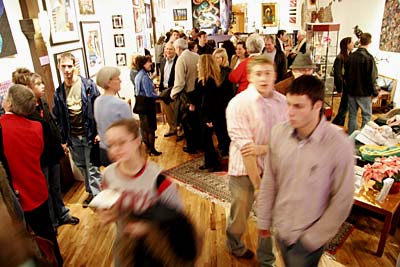 First Friday is usually popular, but we were lucky to have an unseasonably warm evening. With twelve galleries participating it’s sometimes hard to get around to every gallery, but I’d say by the way the gallery was jam-packed all evening, everyone made it to the Hawthorn that night, probably between 400 to 500 people over the three hours. Several people told me they were coming back when it wasn’t so crowded so they could see the art!

Before the night was half over, gallery owner Steve Dlack was saying to me, “We are going to do this again next year right? The annual fiber show!….” 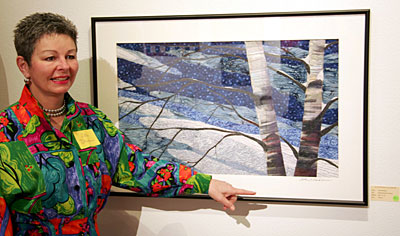 Lettie Blackburn points to the first sale of the show. After the newspaper article came out Thursday morning, people started coming into the gallery right after lunch. This piece actually sold before the reception. 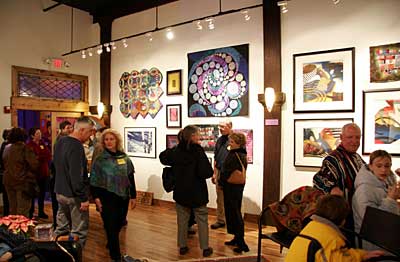 You can see along this wall of the gallery that we had several smaller quilts framed. Laura also mixed other media with the art quilts to show people how our quilts could be hung with other types of art. 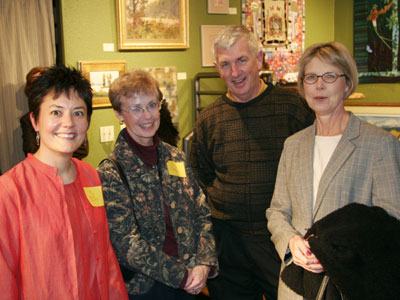 Since Lucy Silliman (center) drives from Kansas to our group meetings, the reception was the first time we met her husband. 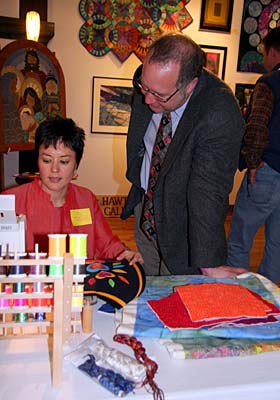 Throughout the evening we did some demonstrations of machine quilting that were very popular. Here I’m working on a small piece with lots of bright hearts–since it’s February, I have valentines on the brain. 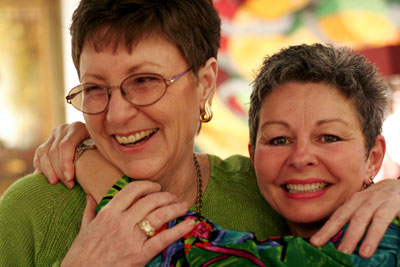 We had around 200 people attend the artists’ reception on Thursday evening, and after it all here’s a tired but happy Merrilee Tieche and Lettie Blackburn. 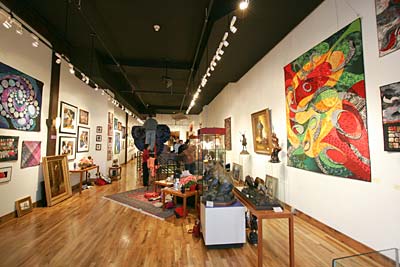 I’m finally getting around to posting photos from the gallery show. It was a snowy February morning, but we got off to a good start on the first floor after hanging Lucy Silliman’s huge quilt. These wonderful photos are all courtesy of my “magic with the camera” husband Russ RuBert. 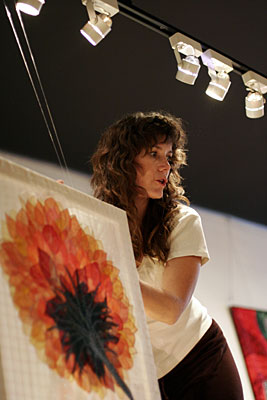 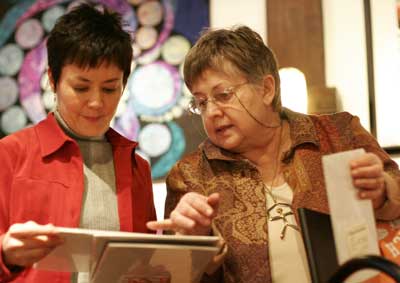 Rosemary shows me her small pieces that she has shrink-wrapped on matboard. Of course I had to buy one and can’t wait to frame it. 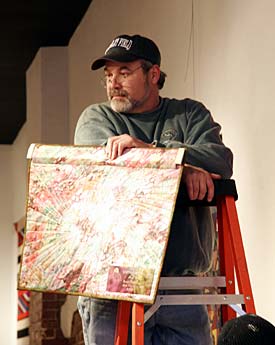 Gallery owner Steve Dlack takes a break on top of his ladder to watch everyone else. 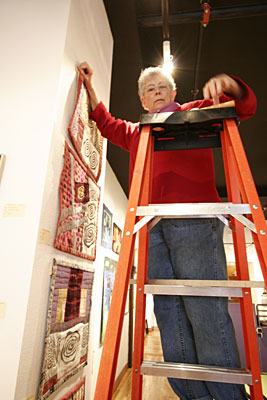 Emmie Seaman hangs her tornado series. She did this series after a tornado destroyed much of her hometown last year. 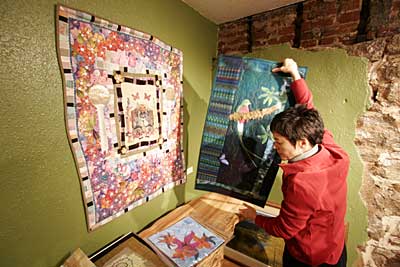 I sort out some smaller quilts to hang in an alcove. There were lots of interesting spaces within the gallery to use. To my left is Emmie’s “divorce” quilt, and in my right hand is a piece by Diane Kelsay. 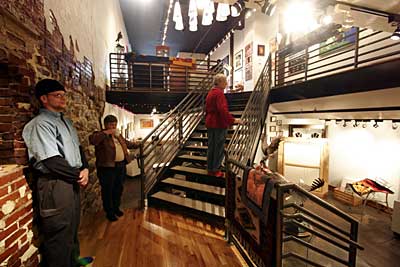 After filling the first floor, we moved to the lower level. We had 72 quilts and used every bit of space we could. 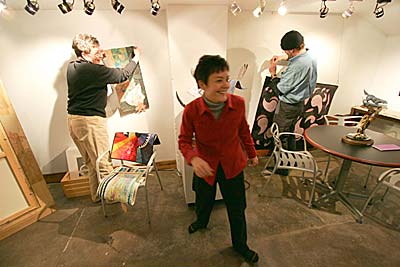 Getting goofy in the basement. It took eight of us working seven hours on Wednesday, and we weren’t completely done by the end of the day…

With a nod to Dilbert, my favorite cartoon besides Calvin and Hobbes, PUMPED so much describes how I felt after yesterday’s meeting of our art quilt group. I was so impressed with the amount and the quality of work we have been able to bring together in a short time for our BIG SHOW. 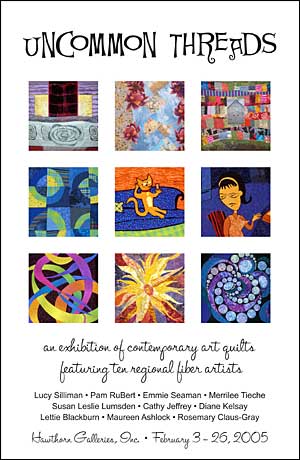 Of course I expected Lucy to show up with a gazillion huge quilts, but even I had to ask her how she got them all in her car. Then there’s Merrilee, who broke her leg very badly in November. She had to learn to run the foot control on the sewing machine with her left foot, and still produced two new bumble bees and one new fish.

Lettie was the sleeper. I knew that as a watercolorist, she had all the right skills to make great quilts. But she showed up with the most gorgeous landscape quilts, I couldn’t believe she had learned those skills and created several show-stoppers in one month.

It’s so amazing this show is happening, considering we only walked into the gallery in December, yes armed with with a group portfolio, some sample quilts, and the promise of a newspaper article, but unrealistically asking for a show in February. Here’s our classy card:

It’s been a lifetime dream of mine to have a gallery show. There’s no way I could do this alone, and it’s so much more fun as a group. And at yesterday’s meeting the arts writer showed up to look at all the work and interview some of the artists, so our feature newspaper article is on track too. As my nephew would say “Awes!”

I can’t wait to get some photos of the show here and on my website, so stay tuned. Until then, there’s the vital data: