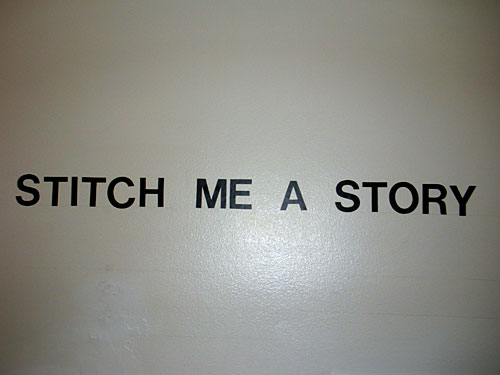 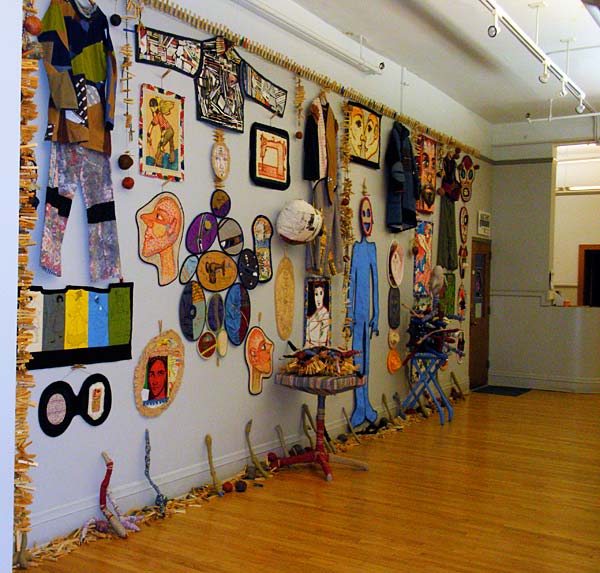 Clever name for a show, huh? Wish I’d thought of it.

I didn’t — Mary O’Shaughnessy did. You may remember Mary, I mentioned her and Charlie (both artists) in a blog post a couple of years ago when we visited their gallery/studio/workspace/sculpture garden in Chicago.

Mary curated “Stitch Me a Story” for the Noyes Cultural Center and asked me to send her some photos of my quilts. She chose five to exhibit, but honestly, I was more excited about Danny Mansmith‘s contributions to the show than my own.

He’s having waaaay too much fun with clothes pins, if you ask me. And a very prolific artist — I just felt that if I saw his work in person, the energy that he puts into his work would re-invigorate mine. 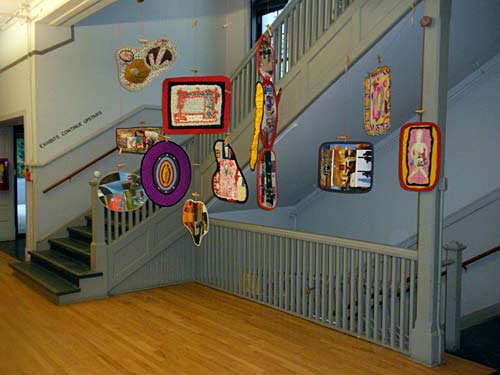 I first read about Danny when he was written up in Fiberarts Magazine a few years ago. Back then I tracked him down on the web to find a wealth of information and photos of his posted on Flickr. That may when I decided to sign up for a Flickr account — possible, since his is the first account that I marked as a contact so I could get Flickr updates on his new postings. 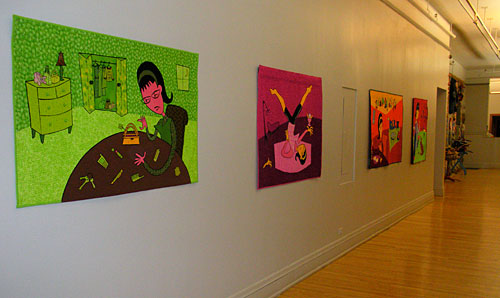 Here’s my quilts I shipped up for the exhibit. It looks like Danny’s installation is just next to mine. I had hoped to get up to Chicago in time to see the show and Danny’s work in person, but since it’s over a nine-hour drive and today is the last day of the show, doesn’t look like we’ll make it…

Thanks to Charlie van Gilder for the photos. Here’s Charlie’s website which shows his art and also Mary’s Art Lamps. Charlie gave me a copy of these photos last weekend when he and Mary were driving through Missouri on their way home after Mary’s big solo show at the Jane Sauer Gallery in Santa Fe called “Daughters of Memory.”

To write Creative Time and Space: Making Room for Making Art, Ricë Freeman-Zachery worked all last year getting a ton of information and tips out of twelve artists (including me). She also got great photos of artwork, drawings, quilts, sculptures, collages, sketchbooks, and studio space from everyone. 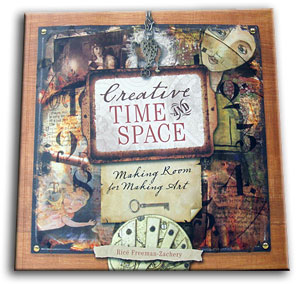 For my contribution to the book, I think I wrote about 20 pages of answers to her many questions and submitted upteen photos of drawings, quilts, sketchbooks and my studio. The finished book is densely layered with the photos, tips, challenges, and personal stories from all of the artists and organized into ten chapters with intriguing titles such as:

This fall Ricë is doing a series of podcasts with the twelve artists she wrote about in the book. In yesterday’s podcast with me, Rice asked more challenging questions. Then towards the end of the podcast, in her usual articulate fashion, she was able to sum up my rambling answers into a concise and helpful set of tips (read her post about the interview on her blog Voodoo Cafe: Notes on Art, Writing, & the Creative Life.) Here are some topics we discussed, but to tell you the truth, the 45 minutes flew by! 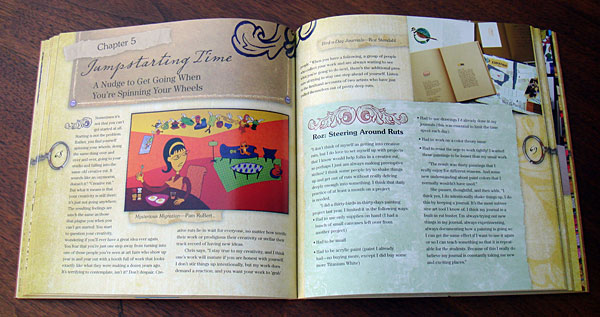 We get a LOT of kids at Halloween at our house — something like 500+  each year the weather’s good. So we have to budget for our Pyramid of Candy carefully. Also decorating is very fun. Two years ago it was “KaBOOki – The Haunted Sushi Bar” and here’s another set of photos from that year – Evidence of Ghosts.

This year, with help from two of our Chicago artist friends Mary and Charlie, the theme is “Domestic Nightmares.” It’s a work in progress as we’re working on the spotlighting for after dark, but here’s a sneak preview. 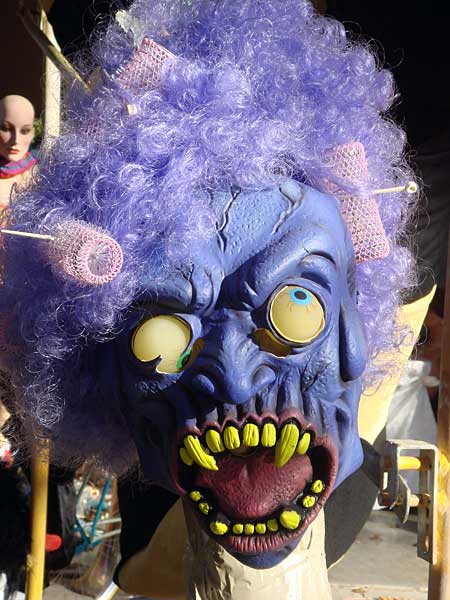 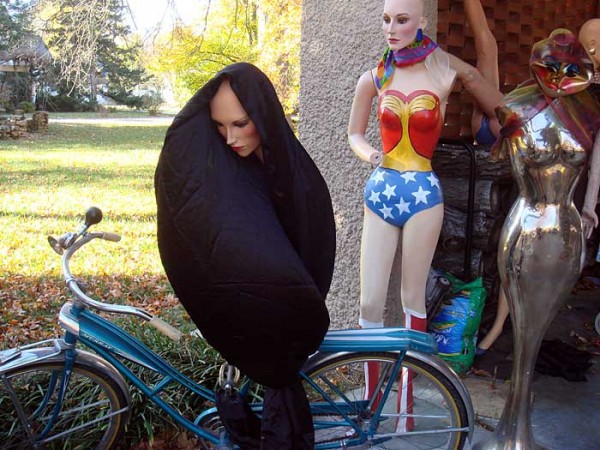 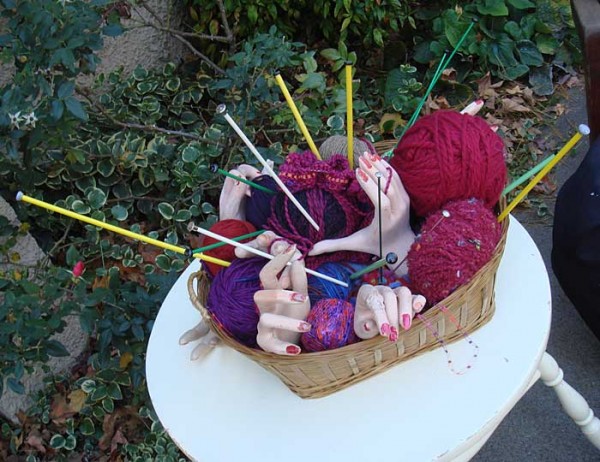 (or happy hands are healthy hands) 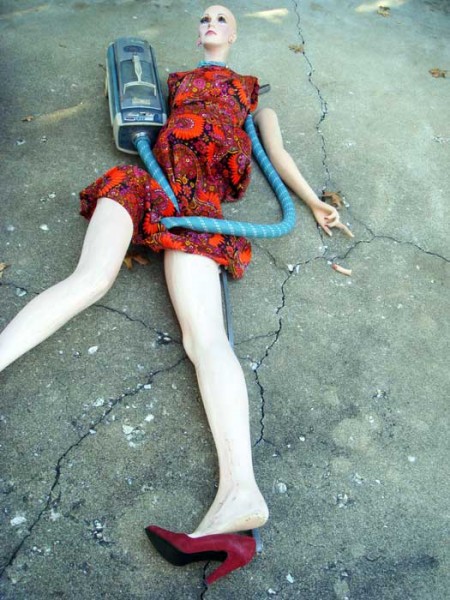 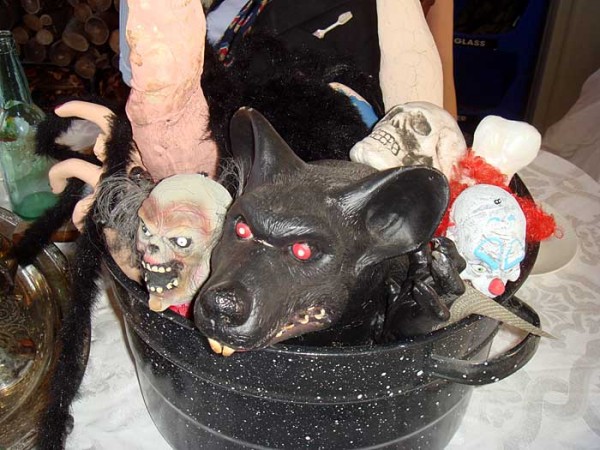 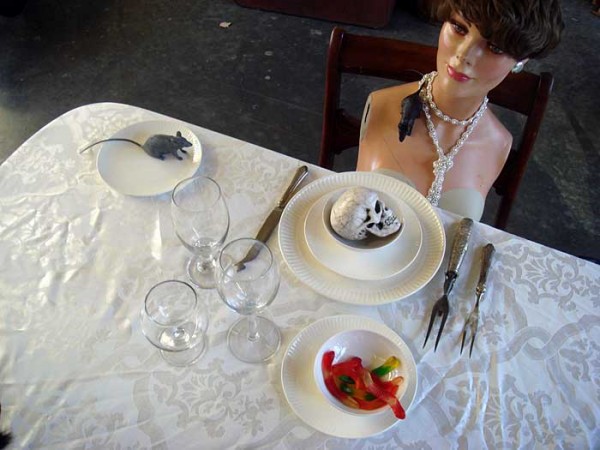 Hmm, I always forget which fork to use first…. 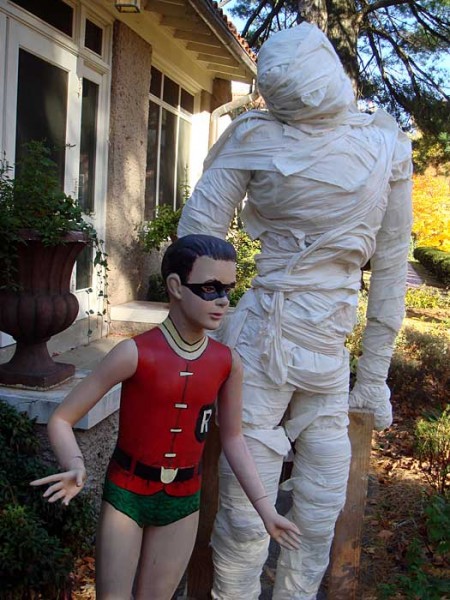 Robin and his mummy 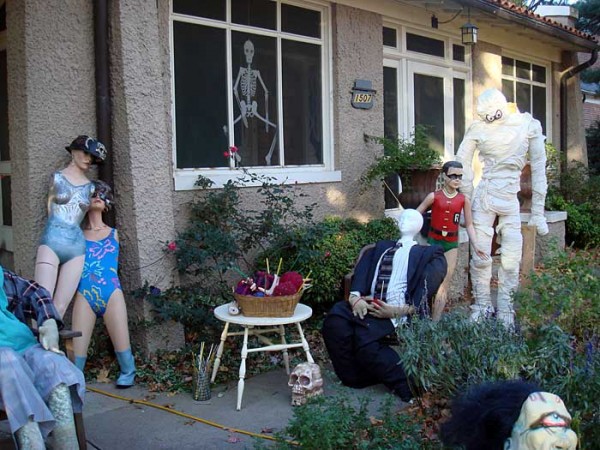 Lighting one of the scenes. From here you can’t see the 15-30 foot stuffed snakes in the trees and other crazy stuff, so we’ll try to take some photos or video after dark. In between passing out loads of candy and eating some ourselves! 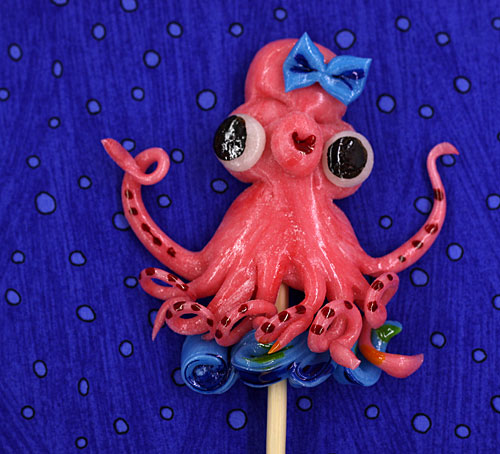 Two Japanese artists visited the studio during their Springfield trip to perform at the Japanese Fall Festival a couple of weeks ago. Candy Miyuki who has taken an old traditional Japanese art of candy sculpture to a new level. She performs at Disney’s Epcot Center, has been on the Rose O’Donnel show, and makes custom candy sculpture for the Tokyo gallery of Yoshitomo Nara.

Here’s a video that Russ took of Candy making a Candy PaMdora at the closing party of the festival. We’ve posted this our new YouTube channel, so you can watch it here, or go to the RuBert Studios channel.

Kuniko Yamamoto also performs at Epcot Center, The Kennedy Center, and at festivals around the world with her wonderfully entertaining stories and magic.

It was fun to have them tour the studio, because Miyuki has just built a new studio, and Kuniko is planning to build a video studio and art center to share with her husband who is a magician and videographer for other magicians.

Here’s some photos from the whole weekend. Click on a thumbnail to see larger. 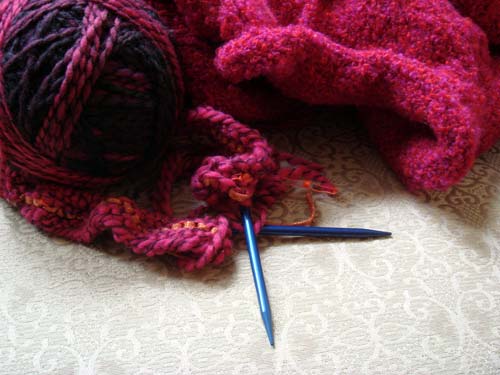 I used to think that writing was a linear thing, and it can be if you’re telling a story. Then blogs came along, and it seemed to make sense to write and post things in order, because in the beginning they were kind of just an online diary of events or ideas.

Now there’s the next generation of blogs. What I’m seeing now and starting to write for are blogs that follow a don’t follow a linear time-line — blogs with front pages that link to all different places in the life of the entire blog.

There are ways to do this in WordPress — for example using sticky posts to make a certain post stay on the top of your post order or featured article categories that do something similar — so I’m assuming this is also possible in Blogger and Typepad.

So now I’m learning to write circular, because  you can’t assume that someone will start at the beginning or end, or maybe you don’t even want them to. If you’re going to use a non-linear structure, you’re got to think about things from the reader’s perspective and try to give them some way-finding clues. What I call circular writing is not like circular thinking, a term many people use to describe a kind of obsessive pattern of going around and around in circles and never being able to break out of a vicious cycle.

Yesterday I realized that by “circular writing” I meant something more like knitting on a pair of circular needles in which you start with one loop of yarn and knit around and around making a tubular shape. When you knit in a circle, you are building on the past. Although you may revisit a place, it’s not repetitious, because you’re actually using it as a foundation and adding to it.

Circular writing also seems to me like making art. Over the years, I’ve found myself coming back to a theme or idea, sometimes not even aware that I am revisiting that idea until I’ve made something new and moved on. Only later do I realize the connection to the past.

Last week Karen left a comment on my “On the Road to a Improved Blog” that she wanted to start a one. I hope she does! I often hear or read about people who are are thinking about starting one, but something is holding them back. Just remember that starting a blog is like making that single little loop. Go ahead and get it started now so you can start building on it. It doesn’t have to be important or fancy, just get going now! And I hope that the idea that you don’t have to do things in a set order may be as liberating to you as it is to me.

If you’re still wondering why you should write a blog, here’s a great video from Tom Peters and Seth Godin about how blogging changed their lives, and why it’s important to do. Everything they say has certainly been true for me. 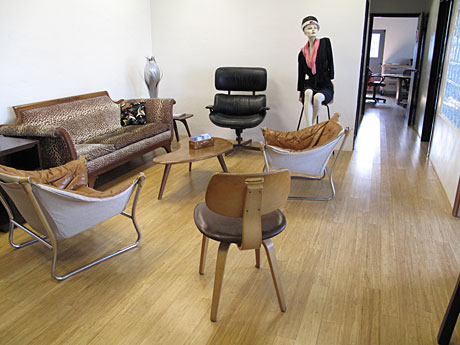 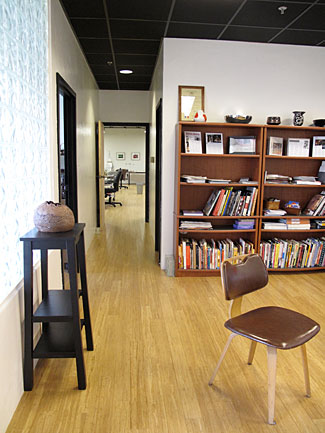 After renovating the studio last year, we’ve gone to a whole new aesthetic — from orange and black checkered floors and multi-colored walls to more of a retro-Swedish-modern look with bamboo floors. We call it Studio2.0.

It’s a very calm clean atmosphere, much different than the usual colorful chaos of my fiber studio in back. I like that I’m finally getting papers, books, and other presentation materials finally re-organized after the mess when our studio flooded two years ago.

A couple of weeks ago I also feng-shuied my office, getting it really clean and organized, and usual, building my own furniture out of old doors and stuff I found in the warehouse. (Except for that $150 Art Metal retro desk that I love and drag from to where ever I happen to be working the most.)

However my new problem: The offices needs some art! especially since I’ve started talking to friends and family on Skype. When I’m on-camera, there’s nothing but a white wall behind my head. The only quirks I have in here are the hula girl on my adding machine and my ceramic lucky cat. And that leopard-dotted sofa that I re-upholstered.

I keep thinking about dragging some quilts up here, but worry they will look out of place. But it’s kind of like the cobbler’s children have no shoes. No art hanging in the artists’ studio? Okay, writing to you today has shamed me. I’ll have to get working on this. 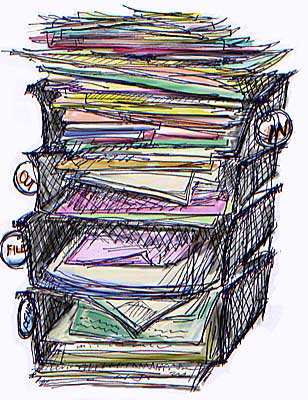 This is a drawing of my in-basket. I guess I’d rather draw it, than do it!

For weeks I had on my to-do list an item “Send images to Curator.” Actually it was one of several items that have to be done for an invitational show at the Lux Center for the Arts that I’ll be part of this April.

Sounds simple, why was I procrastinating? When I actually did get it done last weekend, here’s some of the nitty-gritty details: