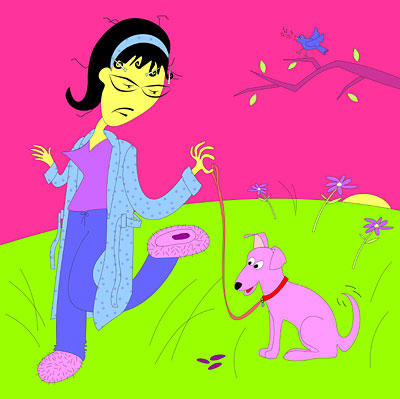 I thought of this drawing for Illustration Friday’s theme Fresh early this morning. To get the full effect, I think you have to imagine how Jerry Seinfeld would say “Fresh!” 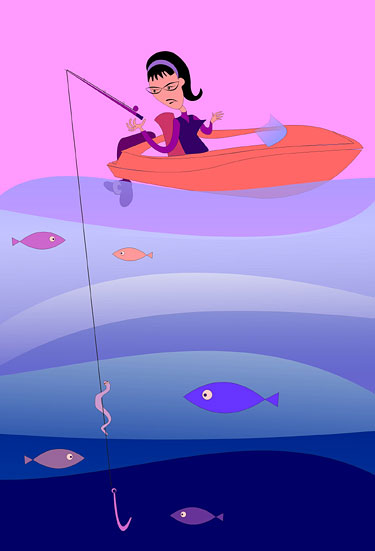 I’ve had this idea for a quilt, every since the warnings came out about all the mercury in fish (which I love to eat, wah!). So when Illustration Friday posted the theme “Depth”, I thought I’d get off my tush and work up a sketch. For a quilt, I’ll want more details, but the deadline for posting is tonight. I’m thinking of a title like Holy Mackerel! We’re Fishing for Trouble. 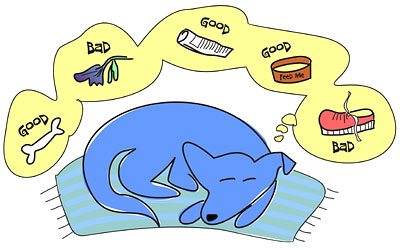 PaMdora briefly thought about naming her new puppy “Karma” so that depending on what the puppy did, she could say, “Good Karma!” or “Bad Karma!” 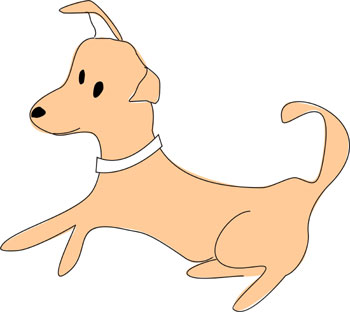 I also wanted to use this drawing for Illustration Friday because orginally I was going to include two puppies — the good one and the bad. But ran out of time… 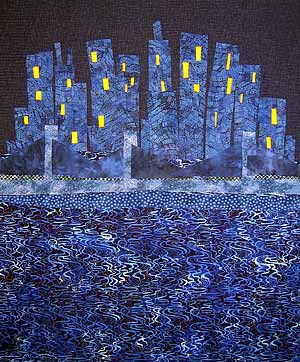 Haven’t participated in Illustration Friday in a while, but I promised myself that I would do my next one in fabric (not drawing.) So here it is: I free-cut the fabric, and improvisationally pieced and fused. No pattern! Don’t know if I’ll quilt it, but it would be fun to define the cables on the bridges in thread. It’s a nice size, 44″ by 34″.

I don’t know if it might look ominous to other people, but my thoughts as I made it were how I love going to other cities and the excitement I feel when driving towards big buildings downtown after dark. 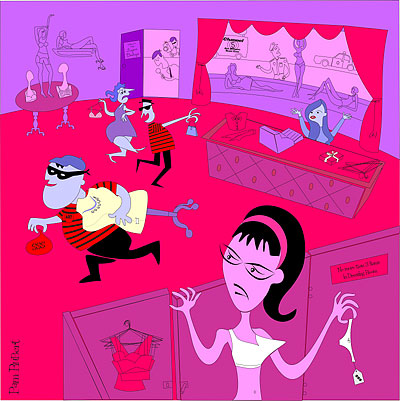 When I saw that the Illustration Friday theme for this week was Mischief, I was happy because I had already started this drawing. There’s plenty of mischief going on here, and lingerie itself seems to be all about mischief. It got to be pretty fun when I decided to add the Channel 5 Eye Witness News Team. You can click on the image for a bigger version.

I thought I was doing pretty well drawing bras, but then I saw Julie’s art bra on her HighFiberContent blog. I guess I need to get more into embellishment if I’m going to be really Hot, Hot, Hot.

I had trouble naming the lingerie store. Lingerie Boutique sounds a little too tame. Tried Lingerie Land but it sounded too much like a miniature golf park, but hey wouldn’t that be a fun one?! Tried to think of a spoof on Victoria Secret (which where by the way is where I got my models for my mannequins) but couldn’t. Any ideas? 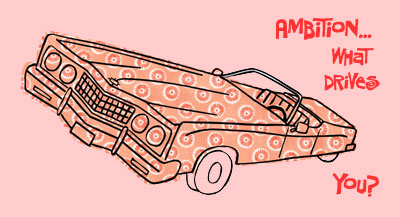 Ambition…what do you drive, what drives you? I know there’s a joke in there somewhere, I just can’t quite sort it out. I have this crazy ambition to one day make an art car out of a 1973 Caprice convertible that’s sitting in the back of our studio warehouse, so I drew it and used Photoshop and CorelDraw to cover it with flowered fabric.

How did it get there? That’s a weird story — someone accidently stole our crane and the Caprice got left behind as a trade, I’m not sure how it all happened. Anyway, it’s big like a boat and rides like one too, and is a perfect candidate to become an art car.

However much I would like to always drive around in a vintage car, I wouldn’t have the patience for it. I get really mad when my car won’t start, and you can’t depend on old cars. In high school I drove a 1965 Thunderbird named Bernice, and although I loved that car, it was very unreliable. 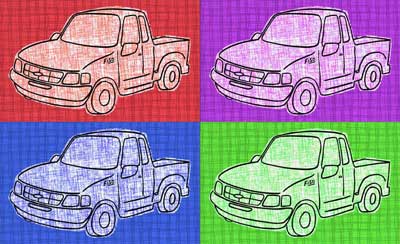 Actually I’m embarressed to admit what I drive right now is a big red Ford F150 pickup, something I thought I needed to haul all my loot when I was going to a lot of auctions. It does come in handy for gardening and remodeling jobs, and it does seem to make guys want to talk to me in parking lots, although usually not the right sort of guys. But it’s a nasty gas hog, and I’m getting tired of trying to park it.

I probably have cars on my mind this weekend, because this was hanging around at the corner on my way to the studio on Friday. 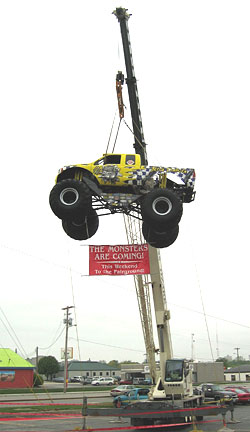 The first weekend in May is a special time of year — it’s when Monster Trucks come to town. I don’t know why I like Monster Trucks so much, but just thinking about them makes me happy. Maybe it’s the in-your-faceness and over-the-topness, combined with the ridiculous wacky appearance of these trucks. Nice and bouncy, don’t you think?

I’ve never actually forked over the fifteen bucks to go to the fairgrounds and see them stomp each other into the ground. I prefer to enjoy the event in my imagination. It’s probably better that way.

And now that I’ve gone over the full range of possible rides, from big to bigger to monsterous, I’ll admit that my real secret ambition is to drive… a Mini. They’re just so darn cute! 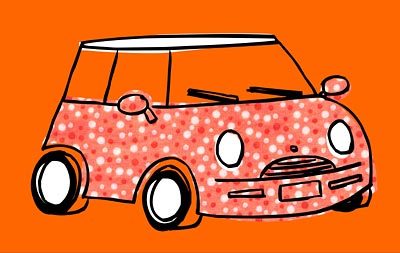 When I first saw the new topic for Illustration Friday, I thought for sure I’d have to recycle the rock-climbing drawing I did back in the February blog archives, but then suddenly *BING* I had a new idea as I lay on the sofa and thought about Russ judging barbeque at the Rock-N-Ribs festival this weekend. He’s a certified barbeque judge, something that lots of people seem interested in talking about about, so I thought barbeque would also make a good subject for a drawing and a quilt. 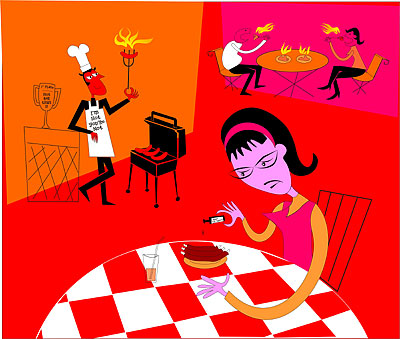 Click on the drawing to see a larger image, but if you still can’t read the writing, PaMdora’s bottle says Sauce for Sissies, the chef’s apron says I’m Hot You’re Not, and the trophy says 1st Place – Hotter Than H. On a quilt you’ll be able to read this because the quilt would be about 54″ x 45″ (not quite Viking size, eh?) I must be vertically challenged in more ways than one, since I tried all weekend to make a vertical design, but it just wanted to be horizontal.

The point of really good barbeque isn’t to make it hot, it’s to make it good, but for me to even consider eating barbeque with my recent attacks of acid-reflux is DARING. Oh, and if any of you are interested in the barbeque judging thing, it’s a very nice hobby. Since Russ has taken that up, I can lie around eating good all summer because he’s become a very good cook and can grill just about anything. Entertaining is so easy, I just make a salad and he does all the rest, yumm!

Speaking of vertically challenged, I had another inspiration for a Daring Drawing, but not enought time. Russ also kept me entertained all weekend by running up and down a 20′ ladder next to the house, peeking in the window at me on the sofa. 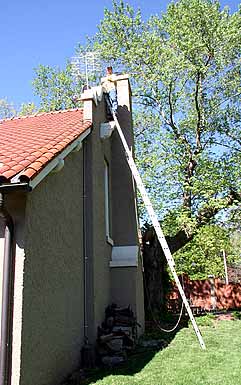 He has just bought a new super-duper antenna that is supposed to bring in all sorts of high-definition local channels to compliment his dish channels, so he was running up and down, up and down to adjust the antenna by tiny amounts, calling me on his cell phone from the roof. Since I don’t know how to change channels using the 43 remotes that are strewn across the coffee table, I wasn’t a very good assistant.

I did finally make it out of the house at the end of the weekend to go across the street for a neighborhood Baseball and Sushi Party. It was a fund-raiser to send a local band of grizzly muscians called the Garbanzos to Japan for a sister city festival exchange. Russ grilled teriyaki hotdogs, and there was sushi, more barbeque and brats, baseball, trampolines, a silent art auction, and Asahi (I even had a little sip!) 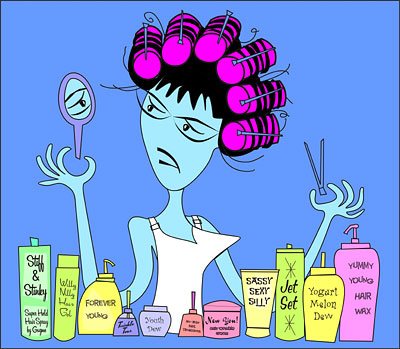 I guess I still have hair on the brain since last Thursday’s post Hairy Relationships, because when I decided to join Illustration Friday, a weekly illustration challenge, this is what I came up with. This week’s topic is “reinvent.” Even if you don’t join, it’s fun to go to the web site and see the many different ways people interpret the topic.