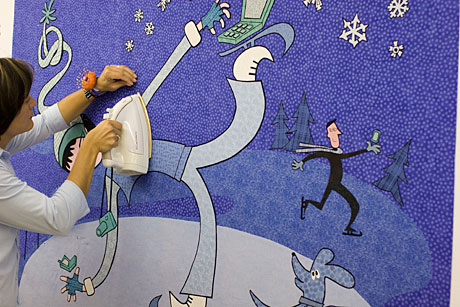 The editor at the last book I submitted photos to complained that my photos were not good enough, so I’ve been working on my photography. Something cool I learned this week was how to use the auto-timer on the camera. So I can set up the camera on the tripod, then run around to get in the picture. This photo probably give you a better sense of what it’s like to work on one of these quilts, since you can gauge the scale.

A couple days ago I finalized the design on the wall and started to fuse everything down. The fusing is only temporary, things almost immediately start to curl up and fall off. But it’s good enough that I can get in under the sewing machine and stitch everything together for good. Did I whine it took a lot of time to cut snowflakes. Now I’m sewing them, which could be worse!

Thanks to Virginia, Gerrie, Jeanne, and others for reminding me about Blog Action Day/Poverty. I missed it here, but their posts reminded me to get off my duff and donate to The Kitchen, a great local organization here that provides food, job-training and medical care to people in need. 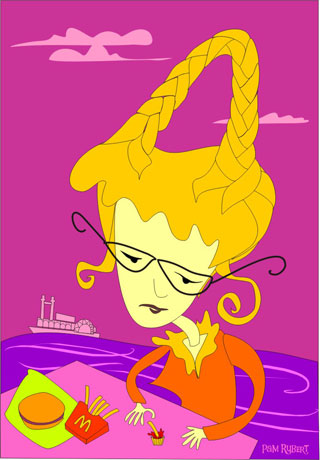 Getting work done for an upcoming show has trashed my healthy schedule of working out followed by a big breakfast of fruit, yogurt, coffee, eggs and rice. It seems like weeks that I’ve been getting up at some unearthly hour to squeeze in a little more work, and am starting to skip the workout and resort to breakfast at MacDonalds. Oh well, just another week and half, then I can get back to a better routine in September.

If you’ve posted a comment recently and I haven’t responded, so sorry! But really it’s taking all my energy to get these things done. Sydney is finished, Athens is quilted, Paris is almost done — so onto St. Louis. 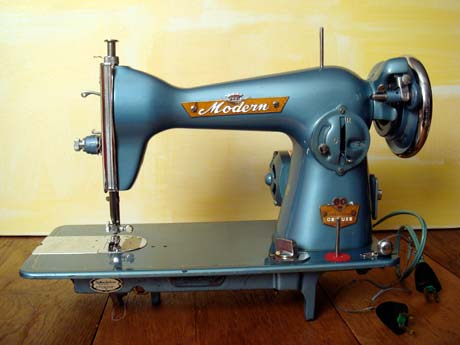 As promised, here’s my prize snag at the 51st Brownsville flea market and craft festival. It’s a Modern sewing machine made in Japan, and actually my eagle-eyed husband spotted it sitting inside an ugly white plastic case in the mud just outside of a woman’s tent who said it belonged to her mother. Rather than carry it back to her car at the end of the festival, she sold it cheap. And luckily for me, my husband agreed to carry it to our truck. 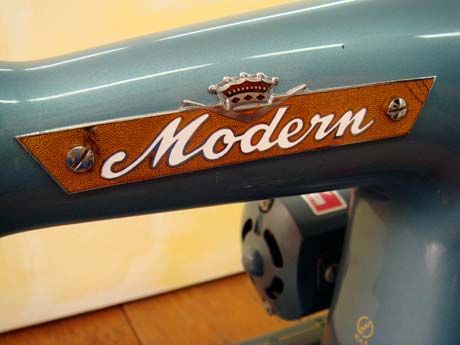 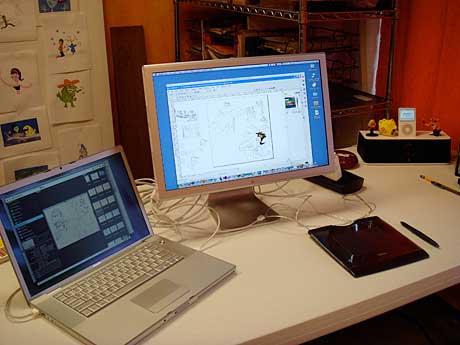 Nice monitor huh? Got for my birthday, and it plugs into my laptop to give me two screens for drawing and looking at reference material.

Drawing for quilts is different than just drawing, because I have to remember that eventually it will be used as a pattern, and that I have be able to construct everything that I draw.

Thanks Grace Matthews for this post which quotes Faith Ringgold, “Underestimation is a psychological tactic for artists. When you employ this tactic you convince yourself that the upcoming project is not really so big or so bad, that it will not take much time and that in fact it’s a piece of cake. This method of trickery helps you to tackle the biggest of projects and makes the project less daunting and more manageable.” This is a great idea and has helped me getting started tackling some projects I’ve been worried about.

Lisa asked me why I signed up for Twitter, did I see any value in it? Not really, I’m just intrigued by the idea of disembodied quotes floating around in cyberspace. It’s like a mini-blog, but there’s no commitment and no images, you can just pop in and out whenever you feel like it.

I also like the idea that tweets must be less than 140 characters, kind of like haiku of the internet. I often get inspired, sometimes even visual flashes from unusual word combinations, in poetry, in written words translated from other languages, and in my own emails that I try to make inventive. So Twitter kind of forces inventive ways of writing because of the limited character count.

And I like the interface, and there’s different tools you can get to manage it. Anyone else out there on Twitter? Almost forgot, here I am on Twitter.

If you’re visiting today, don’t be alarmed by frequent changes in the appearance of PaMdora’s Box. I’m just playing around with different themes in WordPress. A girl can’t wear the same thing everyday, can she?

Can anyone tell me what the different between “categories” and “tags” are? I’ve finally upgraded my WordPress which includes capabilities for tags. 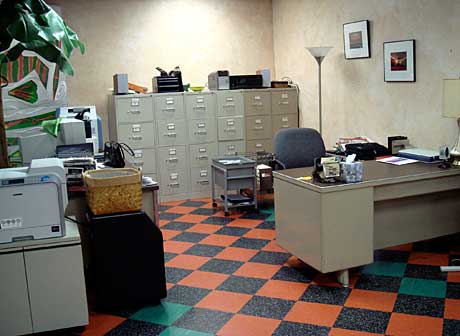 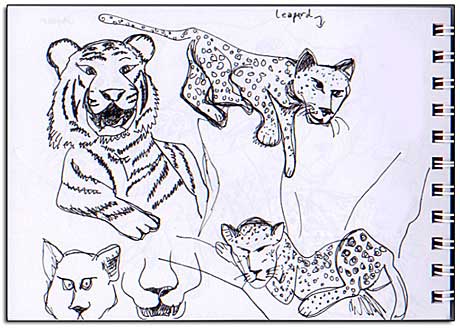 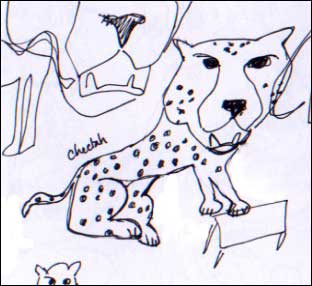 The biggest change so far I’ve noticed is in my mail program — lots of improvements such as a built-in to-do lists that links directly with my calendar. Maybe now I’ll get more stuff done.

Also my dad told me about Cooliris, a free extension for FireFox, and I used it a lot looking up photos for my big cats drawings. 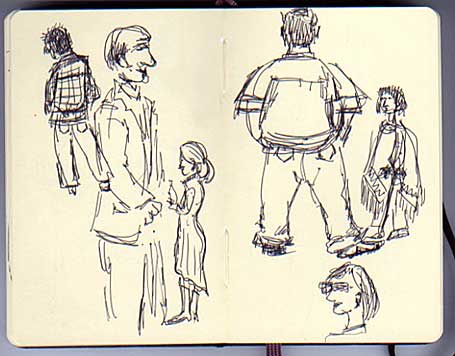 To my last post, Alyson asked if I considered organizing a blog instead of an email list. No, because in my experience, very few people will actually post to a blog. I started a group blog early this year, and it is difficult to get anyone to post to it.

I find even most people who are subscribed to email lists, rarely post. But they are more likely to post an email to a subscription group than to post a comment on a blog. Let’s face it, even though blogging is big news, the people who really stick with it are the exception rather than the norm. Just like speaking in public frightens many people, writing in public can be uncomfortable also.

My goals for the artists’ email list is to build communication between artists and artists groups in my area, and a list seemed a democratic way to do it. Other arts in our area such as the opera, ballet, symphony, and theater are strong and centralized, with each having its own board and staff. Visual artist groups tend to be much smaller, all volunteer, and often do not collect enough dues to make paying the Regional Arts Council group membership dues which would make them a member organization which would also entitle them to stronger representation. I also feel that because artists are spread out and isolated, they don’t have as much voice in local public policy as do the centralized arts groups I mentioned before.

On the other email lists that I have been a part of, I have seen many thing develop and bloom, not from one person’s initiative, but from a consensus of several motivated people. I’ve seen a lot of information and resources exchanged, and I’ve been lucky to make many friends and contacts through email lists.

I believe that at the beginning of anything new, it’s important to open strong lines of communication and build from there — but then, that may be my bias because I was a communications major in school. I don’t want to be a controlling or responsible person behind the blog, I want to get an email list started that develops a life of its own.

Several years ago when I was just starting to study books and magazine articles about art quilts (mostly at night in bed just before I fell asleep), I joined the Quiltart email list group. I can’t remember how I found out about it, or what compelled me to subscribe. But I did, and suddenly I was thrown into this kind of chatty internet world, where artists and wanna-be artists were talking all the time — about techniques, materials, and where to get them, what books to read, artists to look at, what shows people got accepted to, what shows people had been rejected from, how to ship work, how to make work…. And I could ask a question, and it was usually answered five different ways in the same day.

Fast-forward to this summer: I decided that using the internet this way could have a positive impact on other aspects of my art, and have since joined some illustration email and social networking groups. Actually, it seems to be working the same way. I’m meeting people and learning lots of stuff that I don’t know how I would learn otherwise.

Fast-forward to now: Becoming visual arts chairman on the board of a regional arts council has made me think long and hard how I might best use my volunteer time. I’ve decided to try to build a regional email discussion group, but am uncertain how it will work to encourage communication between artists working in different media and allied with different local organizations.

If you would like to join, here’s the webpage to sign up.
It’s hosted off of Russ’s new regional art blog which is here.