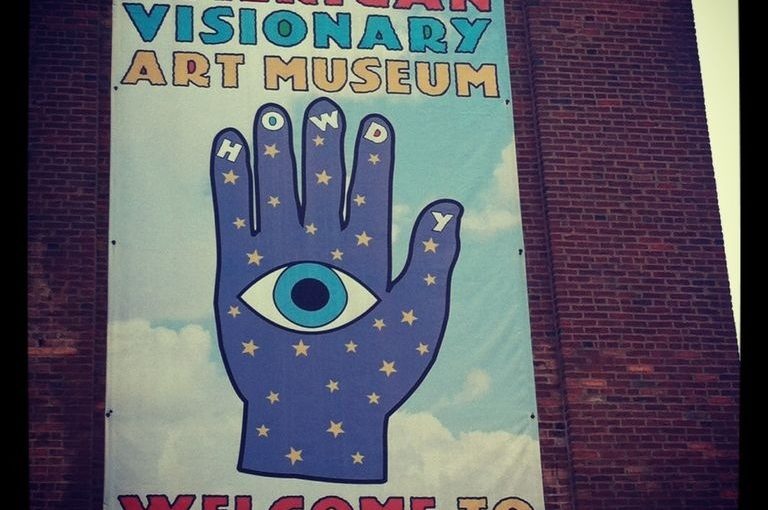 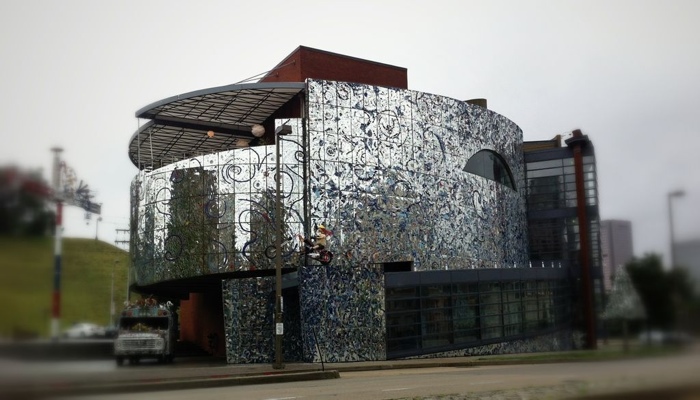 The American Visionary Art Museum is an wonderful place — three buildings of fantastic architecture dedicated to self-taught artists who follow their internal compass. The gift shop filled with art books and vintage toys and gimmicks was alone worth the trip around the Baltimore harbor on a rainy day.

END_OF_DOCUMENT_TOKEN_TO_BE_REPLACED 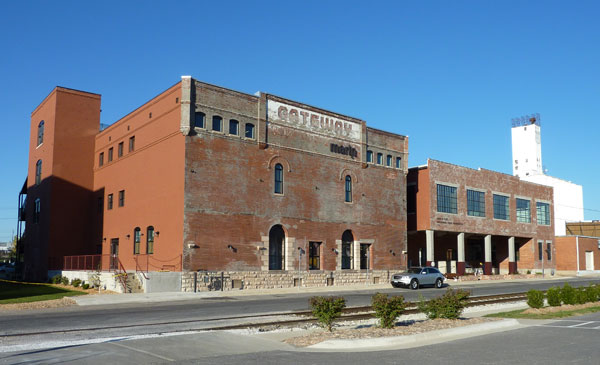 I enjoy telling people that I work in an old peanut butter factory, next door to a paper cup factory, and down the street from a donut factory. So it should be no surprise that I was thrilled to receive an invitation to a party in an old ice house in Brick City. 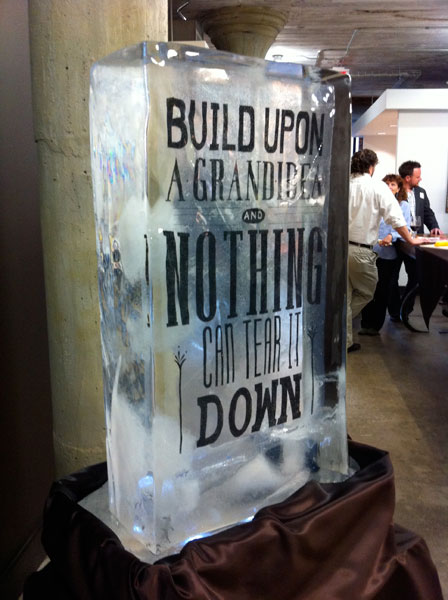 An ice house, I found out is a place were they used to cut up, store, and redistribute big blocks of ice that were brought down on the railroad from frozen lakes up north before there were such things as electricity, refrigerators, and deep-freezers. Hence the old-fashioned term “ice box” was a wooden cabinet where you put a block of ice below your food to keep it fresh.

For the open house of Marlin Company in their new digs, massive blocks of ice stood like sentinels at doorways and in the front lobby of the third floor of this massive old building. Blocks of ice with words in them.

Begging the question, I don’t know how to make such good-looking ice cubes, but here are a few photos. Not only did they look good, the quotes inside had inspiring themes such as “Build upon a grand Idea, and nothing can tear it down,” and “Creativity is the currency of Tomorrow.”

Marlin Company is a creative agency, and some of the people who work there are also artists. And they support local artists in a big way. The front lobby is full of art. 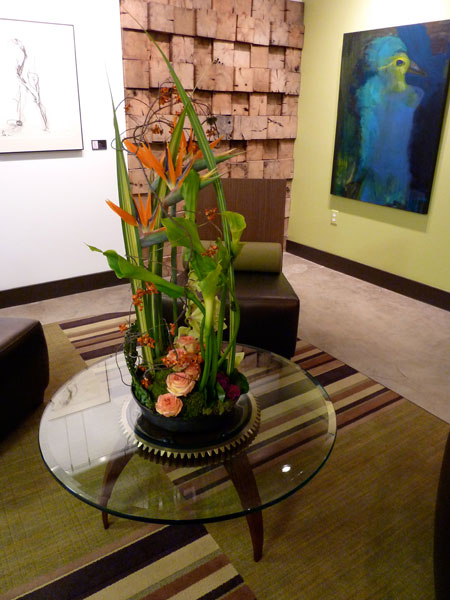 Here’s some of my friend Stephanie Cramer’s work in situ. I didn’t really know it was hers until I had to walk across the room because I fell in love with that blue bird — and saw her name on the tag.

The big gear coffee table? Made from a gear out of the old elevator shaft of the ice house by Michael Stelzer, president of Marlin Company who creates hand-forged sculpture in an old barn in his spare time.

The flowers were done by the Flower Merchant over on Campbell. Some of the arrangements looked almost like alien beings, and the main centerpiece like a formation of moon and the planets swirling around our solar system. And since Marlin’s specialty is working with national food companies, of course all the food was art!

Click on a thumbnail below to see larger images and captions: 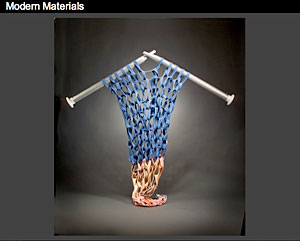 “Conceptual craft” is explained by Jill Rumoshosky Werner, curator of the Modern Materials exhibition at the Artspace at Untitled gallery in the audio interview that accompanies this slideshow that appeared yesterday on the Oklahoma City newspaper and website. The site also features a video of the exhibition and gallery space and this article with comments from the Artspace executive director Jon Burris.

The show will be in the Artspace at Untitled gallery until August 29. The gallery is currently checking into the possibility of traveling the show, so hopefully you’ll have the opportunity to see it in another city.

Art Quilts Lowell 2009 opened at the Brush Art Gallery in Lowell, MA last week as part of the big Lowell Quilt Festival. Maxine sent me word that my quilt Traffic Jam that is part of the exhibit was mentioned in this article in The Sun, and also that the festival and shows had great attendance.That exhibit will be up until September 19, 2009.

Both of these show articles were sub-lined somewhere with “Not your Grandmother’s Patchwork.” I can’t tell you how many articles that I’ve seen across the country with that headline or something similar. It used to bother me, but I’ve come to realize that it’s original in each situation, because the writer or reviewer in that region is trying to dispel a common misconception that a quilt art show will look like a bunch of quilts. And if their headlines get more new attendance at these exhibits and venues, more power to them! 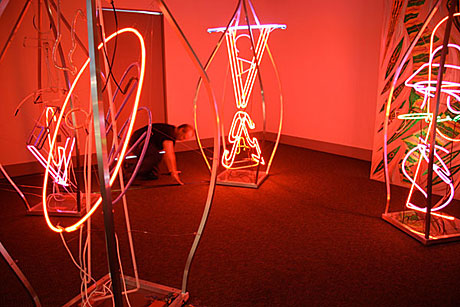 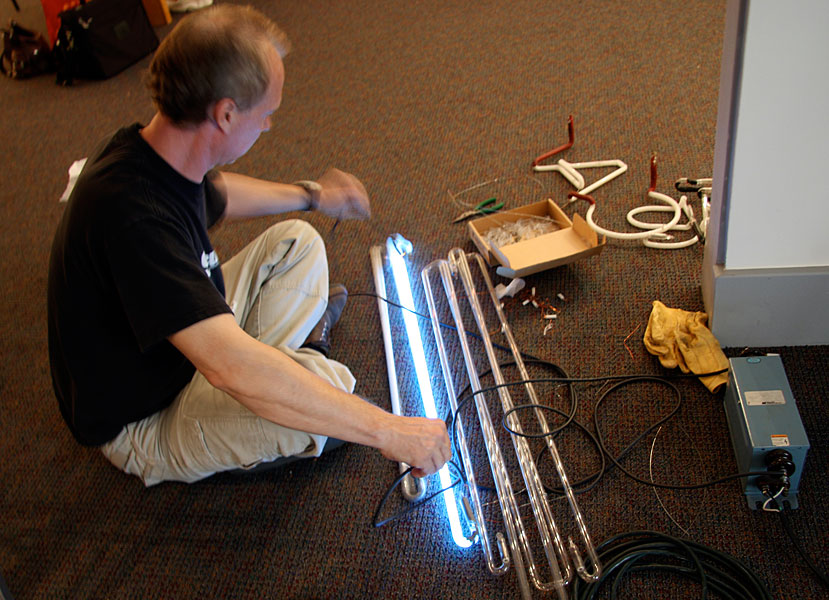 Don’t know why I like these two photos so much. Maybe it’s a little neon yin and yang? Maybe it’s because I just learned that the grill-shapes came from the eyes of Griff’s hamburger guy, who had eyes with hamburger grills in the middle.

Russ has rescued a lot of vintage neon over the years, from old restaurants going out of business or getting demolished. He stores it all, then when an opportunity like the Spiva Center for the Art’s Brave New Art Show comes up, he makes new creations from the old glass neon tubes. 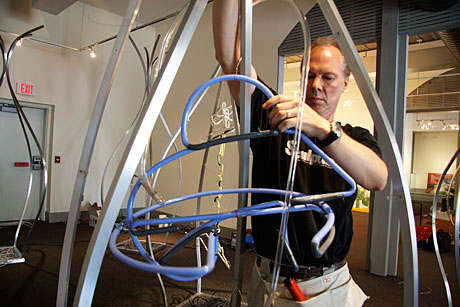 The old stuff is incredibly fragile. If you handle it carelessly, it may crack, or one of the glass nipples where the glass-blower ended the tube is bumped, the tip can be broken. If any of these things happens, the gas inside will leak out, and it will never again work as a colored light.

Also there are little wires on each end, embedded in the glass. If these break off or are cut too short, there is no way to hook the electricity to the tube — which is what excites the gas and makes the light. I know this stuff, not because I do any of the technical or design stuff, but because I help hold and move the glass!

Like much of Russ’s other art, these pieces are interactive. The glass is all hooked up to motion sensors, and as people move around each piece, the colored light goes on and off — illuminating the room and metal in different vivid colors. 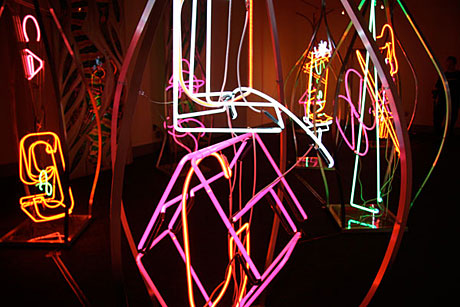 For more photos of the neon, you can visit Russ’s porfolio here. Probably I’m trying to do too much right now, but also trying to edit some video of the installation since it is very three-dimensional and four-dimensional as the different pieces light on and off. 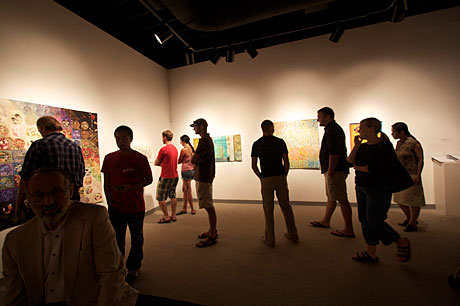 ThreadLines opening last week was a huge success. The gallery was packed all night long, and the show looks amazing thanks to MSU Art & Design Gallery director Robin Lowe and her staff and of course all the wonderful artists who made and shipped their work. Jason Pollen was there to judge the quilts in person, to award the prizes and to honor us with a exhibition of his recent work. 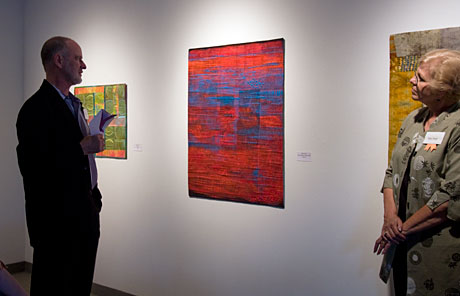 Here Jason Pollen is talking about the Best of Show by Deidre Adams, as Arleta Johnson, our prize chairman (very important person!) looks on. Told you you should have come to the opening, Deidre! Of course we didn’t know until 5 p.m. that night that she was a winner. Here’s a post about the rest of the award ceremony. 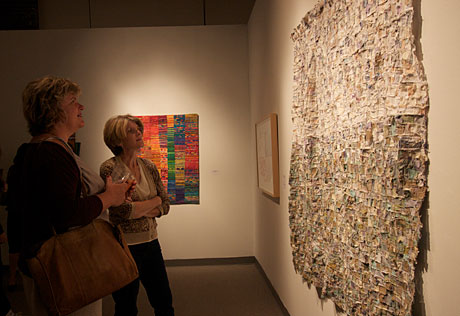 Several artists traveled to the opening, but the prize for farthest goes to Barbara Winoski from Canada. Here she is on the left, discussing her quilt with my friend Sue, who happens to be a seamstress but not quilter. 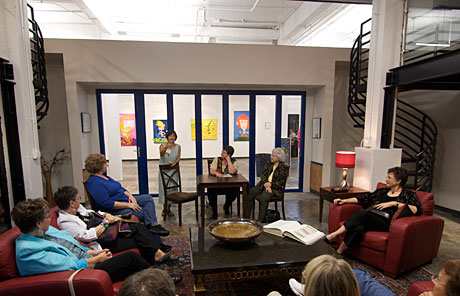 The Creamery Art Center usually doesn’t get as much traffic on First Friday Art Walk since it’s off the path. But here I’m giving an artist talk right after Emmie and Lettie gave theirs in the Creamery art library. You can just barely see my new quilts from the Wish You Were Hair series through the windows to the exhibition space. All together, I have 20 quilts on display and 11 framed drawings and mixed media collages. 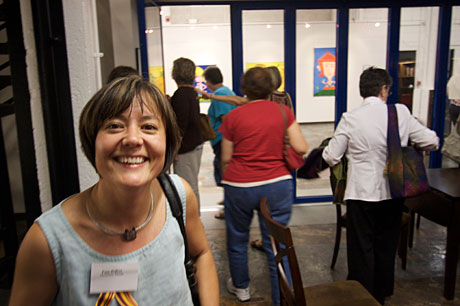 And this is one goofy grin I just couldn’t wipe off my face at the end of the night after surviving a month I thought I wouldn’t survive. Remind me never to schedule two show openings including visiting artists for a two-day workshop on the same weekend as Quilt National deadline ever again. Thanks for the photo Russ — it really sums it all up!