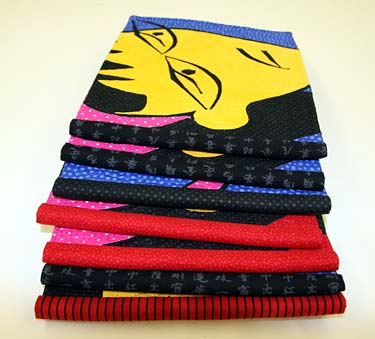 Well, here it is after weeks of labor in the PaMdora sweatshop (I sweating have I been, over a hot iron without aircon in the studio). And golly, that stack must be at least 3.5 inches high! Actually it would have been more like 4.5, but I’ve already mailed two off. The rest I’m going to take to Cincinnati with me, because next week the International Sculpture Conference will be there and you just never know who you might see!

In case you haven’t been following the entire process through my blog, I’ve been making little fabric-covered printed portfolios of my work. If the sculpture truck doesn’t leave any minute, I’ll try to post photos of the contents. 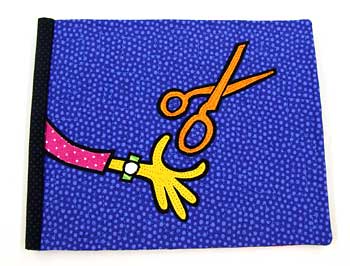 Here’s the front of my new book. I’m glad so many of you told me to leave off the bindings, because that’s the direction I was already working. Actually, I’m not opposed to bindings, you’ll notice that I put funky stripey bindings on most of my big quilts. But you’re right, for such a small project the bindings were taking too much space and time. It’s a lot easier to leave them off, and leaves as much space as possible for the design. 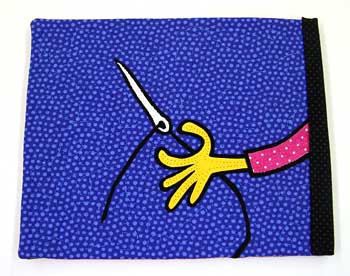 Here’s the back. I thought about doing some kind of fancy embroidery technique for the thread, and then thought naw… Maybe you can already tell that there’s a little less angst and a little more humor in this design. Oh, and look….

Actually, when I made my first hands covers, I forgot to flip the arm for the backside. I redid that, then laid them out on the table and realized that the arms weren’t symmetrical. So I remade them again because I thought it was funnier. What I won’t do for a joke? Now I have three arms too many. Everyone should have this problem.

Now I hesitate to show you this, because there was such a good response to the extreme cropping in my last design. But I’m also working on trying to make PaMdora smaller for another project, and this seemed like a good way to experiment.

Now if I can only figure out how to make her arm wrap logically (in a cartoon sense of the word) around the book. What do you think? It could be fun, and maybe I could have the best of both ideas. 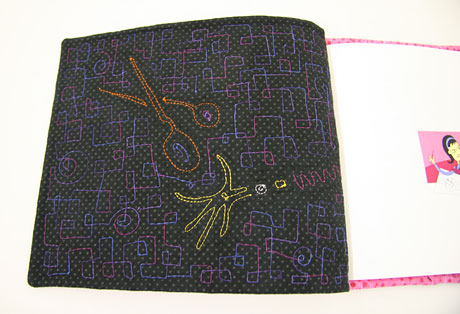 Here’s a photo of this ghostly image inside the front cover. What a surprise! Of course I could have just stopped with an earlier design for the portfolios and laid out a little assembly line to mass produce something, but I’m having too much fun experimenting right now. And I wouldn’t have found out interesting things like this. Omega sent me this link for Alice Kettle who she says works backwards. Hmmm, me thinks this bears some more investigation.

I like that these are small projects that take only a few hours as opposed to a hundred, and I still end up with something that I can use rather than throw on the scrap pile. 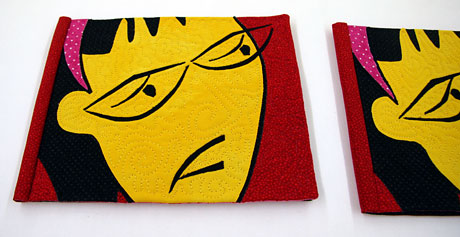 You guys are great! I knew when I got stuck, that I would get lots of suggestions if I posted my work-in-progress. And you all really came through. Thanks for all the great ideas. This weekend I changed my approach completely – dropping the binding and doing a pillow-case finish on the covers.

It helped speed things up, because I’m really not that great at bindings. Actually I don’t consider myself very good at precision sewing, so I have to design around that. For these two books, I played around with some extreme cropping to keep PaMdora’s face the size I normally make it.

Designing these books is a completely different way of thinking – it’s not just how it looks from the front, but the whole experience as you turn the pages, right to the very end. I love the way the backside of the cover looks after quilting her face. Sometimes I think the backsides of my quilts are more interesting than the front, and here’s a chance to take advantage of that.

On each side, I’m using different fabrics and threads, for a little surprise and to make the viewer want to turn it over and examine every surface. Without the bindings, the books (which by the way, are 7″ x 9″) have a very nice feel to them. The covers are simple and soft. I’m using scrylic felt as the middle layer, because it has the same appearance as batting, but it’s a little bit stiffer.

The funny thing was, after I finished these two books, I showed all of them to Russ and he said, well I still like the one with the bird on the cover (photo in the previous post). He said, it reminds me of one of those things you set pans on. I told being called a potholder is not considered a compliment in the art quilt world. He said he thought that didn’t matter, that they were appealing that way.

So what do you think? Go back to putting bindings around all the edges? Today I started three more books with different designs, but none of them have bindings either – except for the spine. Hopefully tomorrow I’ll get them done. 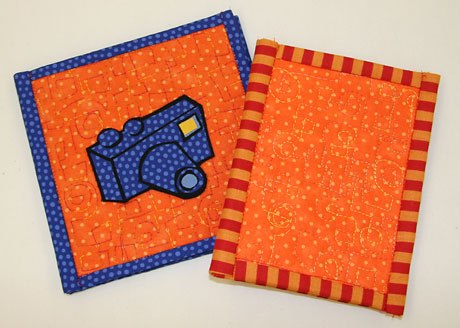 I’ve been making little books for two weeks. The covers are fabric but the insides are paper. I got started doing this because I was asked by a curator to send information about my quilts, and I’m worried about sending photographs to someone who’s never seen the real thing. I don’t think the photos tell the whole story. 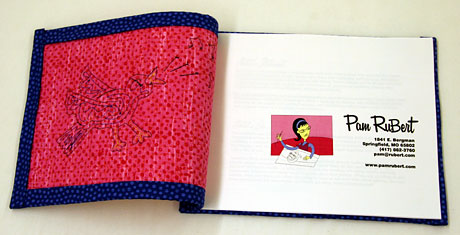 So I’m trying to design a printed portfolio that has a quilted cover. Just to give someone a real clue what the work is all about — what the fabrics are like, what the construction is like, what the colors are really like.

It took quite a while to design the fourteen interior pages with photos of my quilts, details of quilts, a brief resume, artist’s statement, and bio, and some photos of people reacting to the work at exhibitions. In my experiments, I only tried sewing 12 pages, but the final version got to be fourteen (didn’t want to stop at 13). I was a little worried about sewing 14 pages, two covers, and binding, but it seemed to work okay. 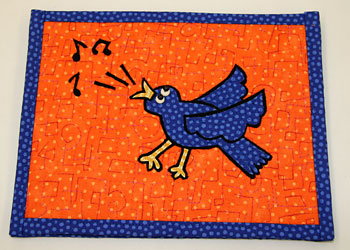 I’m having trouble with the cover design though. The covers are stitched with varigated King Tut thread, so maybe I should just leave them plain. But I keep trying to put add things on the cover. I thought about doing my name, but that seemed too obvious and boring to cut out. Then I thought about being more cryptic and just having objects on the cover. I think the problem here is I used the same fabric for the blue bird as the border — boring! And maybe there’s too many musical notes. 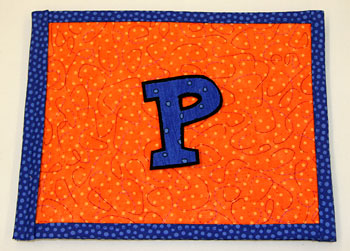 Then I thought of using my initials, PR, ha ha. Probably only I would think it’s funny that a monogramed portfolio would have the intials PR. So then I thought of just P. P for Pam, P for PaMdora. But here it looks like something a cheerleader would wear.