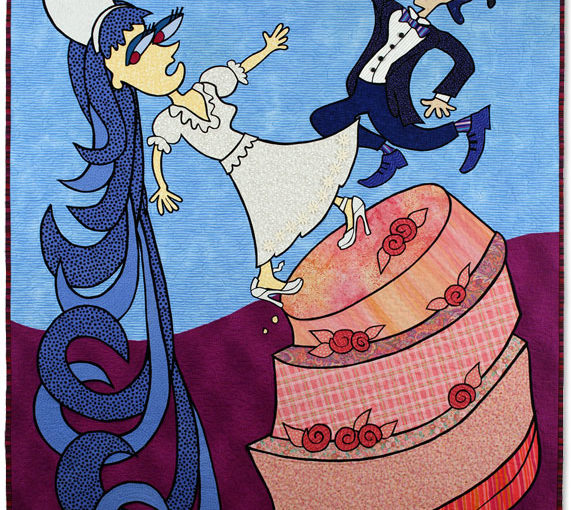 Someone on one of my list-serve emails groups called Quilt National the Holy Grail of the art quilt world. That’s pretty close to true, so it was super exciting to get the news on Monday that one of my quilts was juried into Quilt National 2013.

END_OF_DOCUMENT_TOKEN_TO_BE_REPLACED

I was joking on Twitter the other day:
Time to put on my cape and become Super Organized Person.

I had been stressing out all week, because two big events had be scheduled for the same day. And they were 221 miles apart.

Months before I had promised to speak at a new series at the Foundry Art Centre for their new “Luncheon with the Artist” series that also kicked off Quilt National 2009 month. They gave me the choice of three dates, so I picked October 8.

Last spring we had also promised to host a big event at the studio for a band of Lady Mariachis who would be traveling from our sister city in Mexico to perform in downtown Springfield for Cinco de Mayo. But that trip got canceled due to the outbreak of the H1N1 flu.

So the trip and ArtsFiesta! in Founder’s Park was rescheduled for fall. Because of the extensive performing schedule of the band, there was only one date available for the promised welcome party. October 8.

I can do this, we can do this – just takes a little planning and early prep, right? But as usual, we were busy, things didn’t get planned early enough. There were visa and plane reservation problems for the traveling group, so it seemed easy to put off decisions about food and sending out invitations, etc.

Then the week arrived, and I wasn’t ready. So the Twitter joke. The rest of the story has two parts.

Part One: The Cape Worked

Somehow that visualization empowered me. Two days before I got busy and found some creative food ideas. Colorful whole fruits that didn’t have to be cut up, we could just plate at the last minute — have you heard of kiwi berries and sugar pears? me either, but they are good.

A place that would make spicy chicken, sundried tortilla wraps, and eggplant-mozzarella rolls that I could pick up at 5 p.m. (Sam’s!) Bought the wine, tequila and flowers there the day before when I ordered the food.

Edited down my keynote gallery presentation from one hour down to 20 minutes as the Foundry has suggested, and thought of a new way to tell my quilt stories backwards (more on that later.)

So I was set, I was super-organized.

That morning I had trouble getting out the door, as usual. Turned out my math is so bad, I could still get there on time. But halfway there, it started to pour.

Got to the Foundry, set up the projector and tested my images. Took a quick tour of Quilt National 09 — fantastic, but sorry I didn’t have more time to do it justice. I was nervous at first, face with a room full of 50-60 people looking up at me, but was happy that family and friends had also made the trip.

The twenty-minute talk turned into 50, there was a lot of discussion about the QN exhibit, and I left the Foundry on time. On my return trip, the rain was worse, and St. Louis was a mess of traffic and blinding clouds of water.  Driving past a couple of wreaks was bad enough, but it was unnerving when the National Guard was working the third, and traffic slowed to a creep. I kept hearing reports on the radio of flooding through the area and other roads closed because of accidents.

I knew that this point I wasn’t going to make it home in time and worried about making it at all — so I called Russ. My hero! He was done setting his neon sculptures early and could go to Sam’s to get the food. The day before Carla had agreed to come early to do flowers and fruit, Kay and Tom to pick up the cake and set the buffet.

So even if I didn’t make it back in time, the party would be okay. I could concentrate on driving more slowly, safely, and making it home with out having a wreak. I got back about an hour before the event and was happy to see everything going smoothly. The studio looked beautiful, new art installed, the Garbano’s arriving for their wild entertainment. Heck, the party was already populated by the many mannequins we had re-dressed the day before!

Part Three: What I Learned

Visualize yourself as a Super-Organized person. It really works. Just tell yourself you can do it, because you can. But don’t forget that things happen, weather happens, fate happens, and you can’t control it all. So hold your family and friends close, lean on them when you need to, and be glad when they let you. 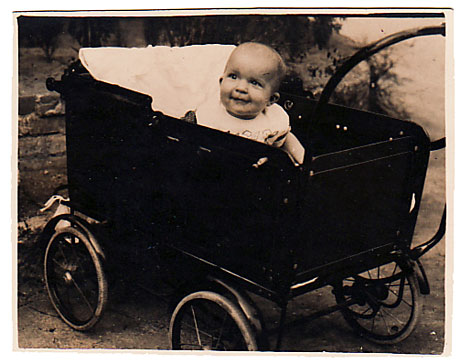 I used to think that tag clouds were silly, but now I’m starting see what they can do if you tag your blog posts.

Yesterday a reporter from the St. Louis Beacon called me to ask questions for a story she’s writing about Quilt National 2009 that’s opening soon at the Foundry Art Centre in St. Charles, MO — I think the opening reception is September 25.

Since “Paris-Wish You Were Hair” is in QN this year, she was asking some questions about how I made the Wish You Were Hair series of quilts. So I worked on the blog, adding thumbnail photos and tags to my posts related to the series.

Because I wanted to send her this link by email:
http://pamdora.com/blog/tag/wish-you-were-hair/

If you click on that, you’ll see an archive list of posts over the past year about that series. Cool, huh? It would be great if all my posts were tagged, but now I’ll have to go back and do more. So my tag cloud will be changing shape and emphasis as I get more caught up, so it will be interesting to see how it changes over in the sidebar on the right.

What does all this have to do with baby in a carriage? Nothing really, except Donna shamed me into posting another vintage photo. Stuff’s happening so quickly around here I need to start posting more and faster — we’ve got video to edit of Japanese Taiko drums and a Japanese artist making a PaMdora out of candy, Spike’s new book Quilting Art: Inspiration from 20 Contemporary Quilters just came in the mail, and Mary’s show “Stitch Me a Story” opens this weekend! 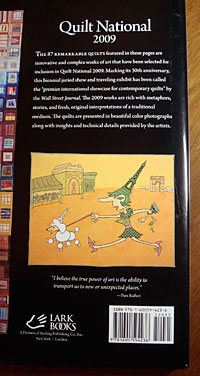 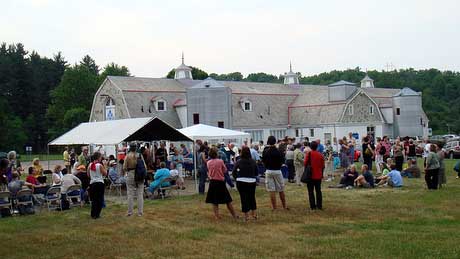 In the words of Prem Joshua, “Tonight, let us speak of love. I can think of no better subject until the day we die.” I’ve been writing a lot lately, and it struck me that artists don’t seem to talk about LOVE very much. Maybe love isn’t one of those good art-speak terms, unless it unrequited love, or sad like that. I was thinking about putting the word in my artist statement, just to see what happens. What do you think?

Anyway, here’s a last few photos from the Quilt National 07 opening weekend — this is the artists’ party on Saturday. Hillary Fletcher, the heart of Quilt National for so many years, used to have this party at her house and make all kinds of fancy homemade cheesecakes. She was much missed this weekend, and now the party is outside the Dairy Barn. 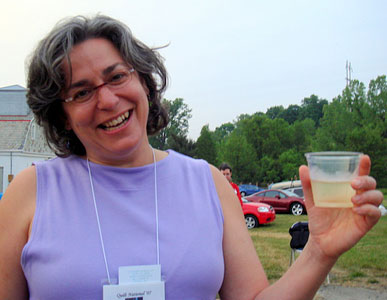 Here’s one of the exhibitors I loved meeting — Judy Rush, and I think she’s got a lotta love in that glass. Okay joking aside, it was great to meet artists whose work I love!

One last thing while we’re on the topic — I took this photo at the Franklin Institute of Science in Philadelphia while we were there to see King Tut. Now this is a guy with a big heart! 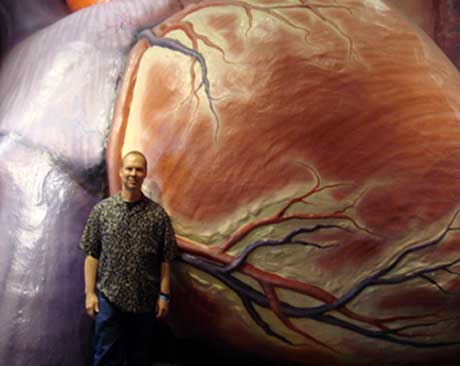 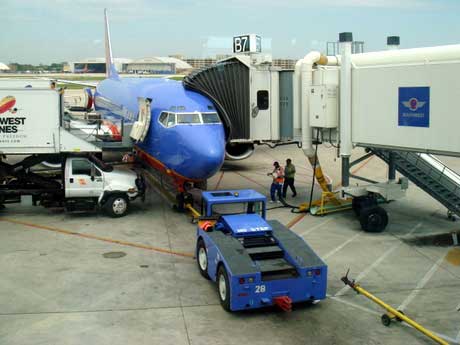 Since we couldn’t use the dog scooter, we had to resort to a more traditional form of transportation to Athens, Ohio. I ws totally inspired by the activity and colors of the Southwest planes, and took lots of photos of the baggage being loaded on our plane. Great colors for a quilt, don’t you think? 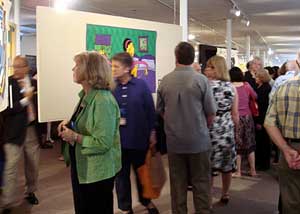 The Quilt National opening was mobbed. More people than the last show and so many people that you couldn’t hardly see the quilts — see what I mean? I’m going to have to return tomorrow to really see the work because there’s lots of great stuff that I missed. 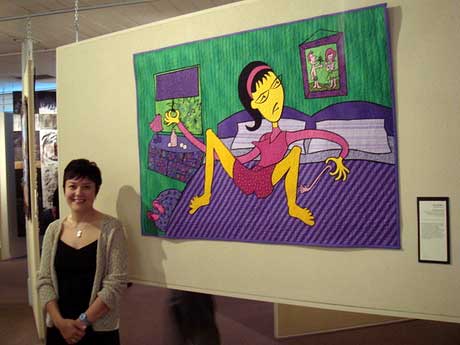 When I made this quilt, I was so focused the story behind it that I didn’t realize what it might look like if you didn’t know the story or read the title. But all evening I got questions about what the crotch shot was about. It’s not about that, it was because I had poison ivy so bad that I just lay on the bed, trying to to let anything touch my legs, not even each other.

If you’re wondering, the pink thing is one of those plastic back-scratchers with a little human hand on the end, just because I think those things are kind of creepy and funny. And in the painting behind the bed, Adam is trying to give Eve a poison ivy leaf, just to put a different spin on an old story. 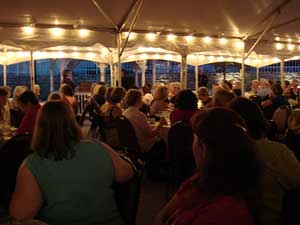 The award dinner was also packed, and it was fun to see lots of folks I hadn’t in a while, and some new ones too. Luckily I wore a sweater in case the air conditioning was too cold. Unluckily, the banquet was outside in a tent, so it was swelteringly hot. 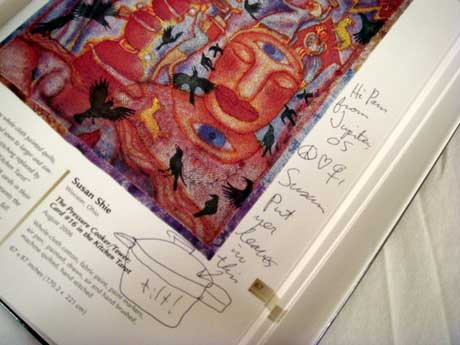 At these things, it’s fun to go around and get everyone to sign your book, kind of like a high school annual. Susan Shie whose wonderful quilt is on the cover of the new book (it’s also very handsome – order one today!) even drew me a steam-pot to put my poison ivy leaves in! What a hoot!