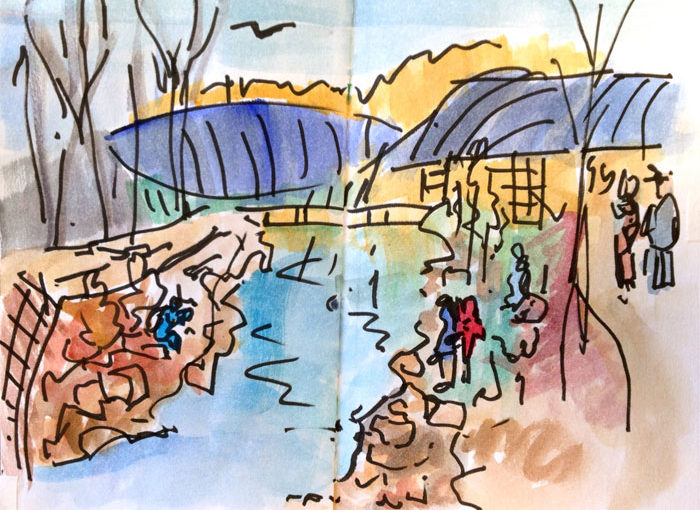 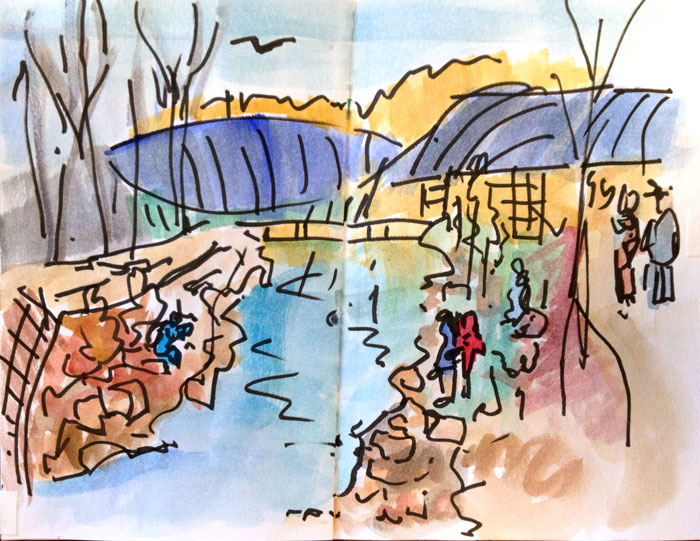 Finally! Beautiful weather for a whole weekend, so we rode and walked on trails both days at Crystal Bridges. A family from India was visiting, the father on one side of the stream telling his daughters across the water how to pose for a photo.

These were all about 5 to 10 minutes sketches with a brush pen, colored with watercolors later. I didn’t know Russ took a photo of me sketching until I saw this on Instagram! 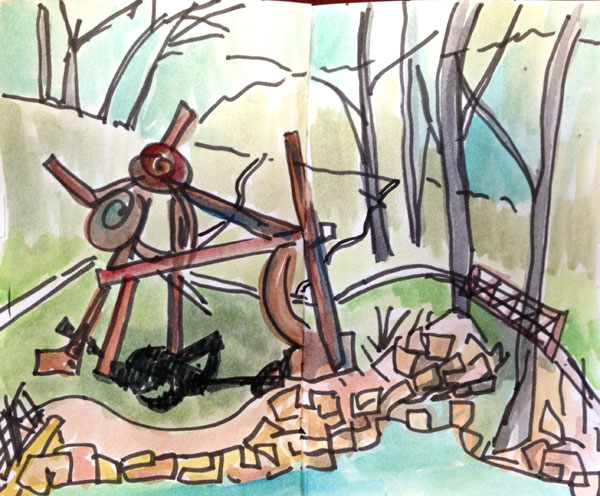 Looking out a window to a Mark di Suvero sculpture — a little tricky to draw! 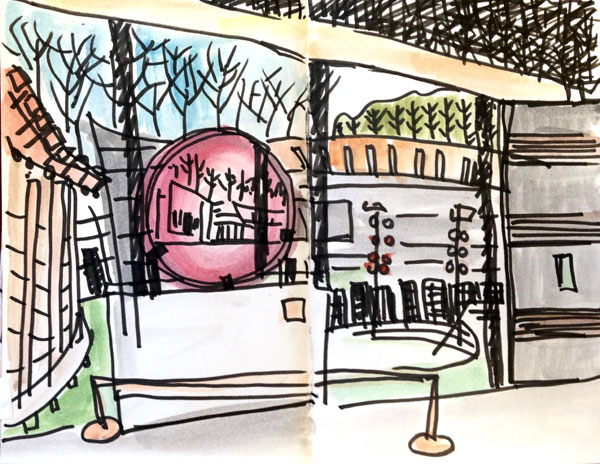 From inside the museum, an interesting view of the outdoor plaza through a cast polyester “Big Red Lens” by Frederick Eversley. The whole scene becomes a puzzle to draw, and probably doesn’t make much sense. I got confused myself and drew trees on the ceiling which I had to cover up later with cross-hatching. 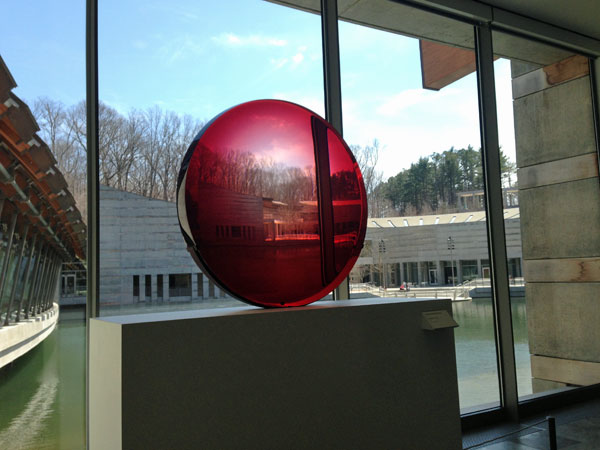 Out on the plaza, there’s a funny orange-red Keith Haring sculpture. A museum staff person was passing out drawing boards, paper, pastels and pencils to invite the public to draw. 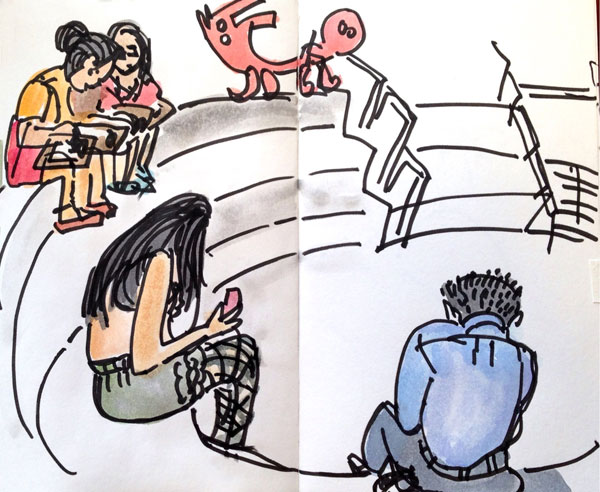 At first I saw more people looking at their phones. Then Russ got into the act, so I sat down too and drew some more. 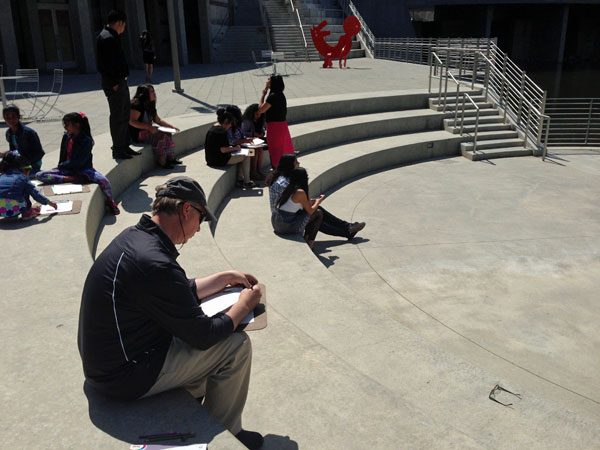 Eventually I noticed a group of five girls, all with drawing boards. Some looked like they were seriously drawing. 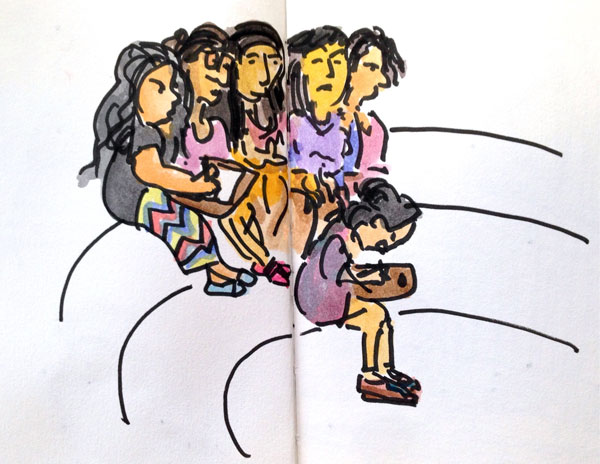 How interesting the plaza bowl was so large, and yet with all that room to spread out, they sat squished together so tightly, their boards almost touching. 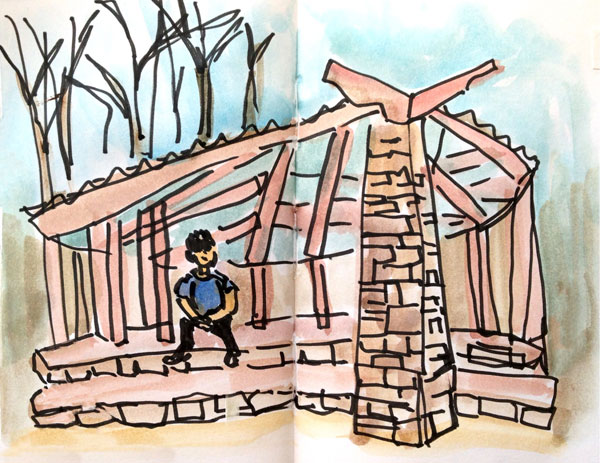 This guy sitting under a pavilion watching his kids was funny too. “You kids go run around the trails about five more times. And DON’T PICK THE FLOWERS!” 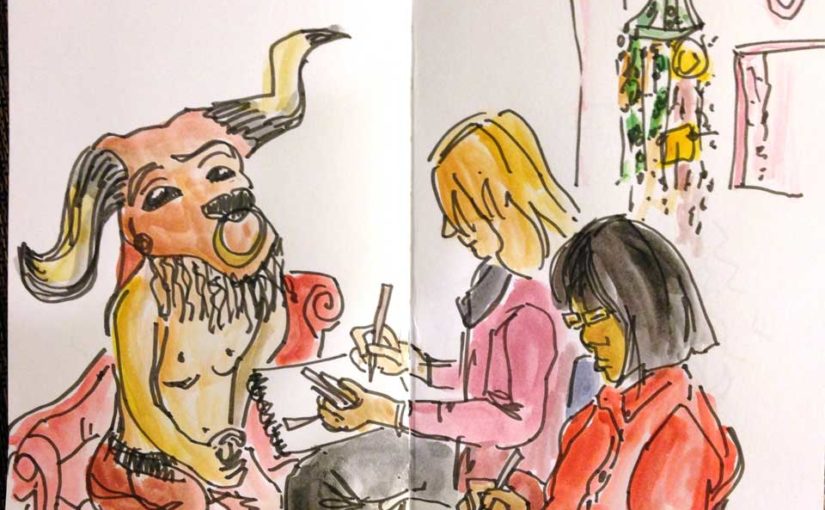 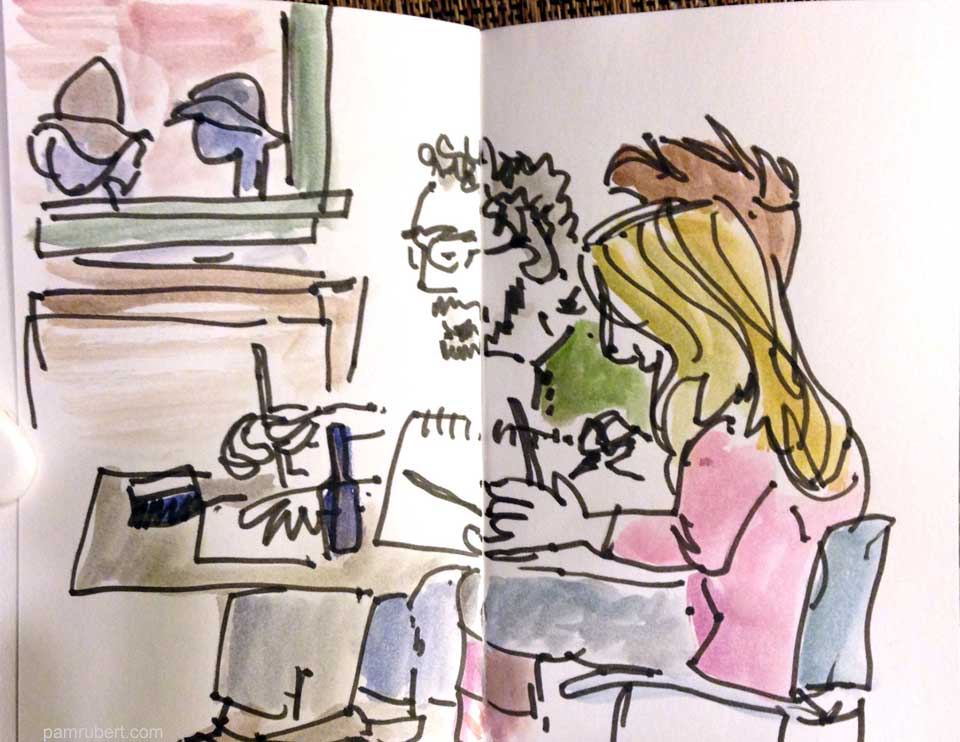 Here are some drawings I did last night at Arts & Letters Alternative Figure Drawing night. I like going to these things, but tend to back away from the crowd so I can also draw the drawers. It’s interesting to look at what materials people bring to draw with and how they hold their hands. 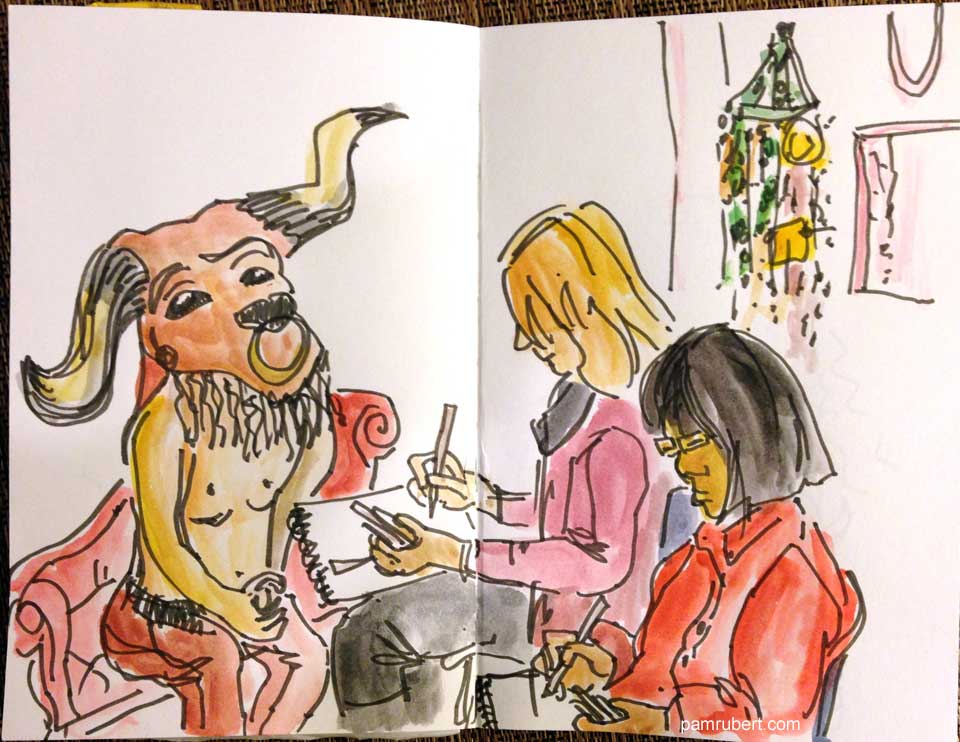 Also it gives me a chance to fill in some background elements that add color and balance the composition. Sometimes I’m completely off on my composition, proportions, and scale, but I like to draw with a brush pen because the mistakes become part of the drawing. People move around and you just have to adapt, which gives the drawing it’s own sort of internal life. 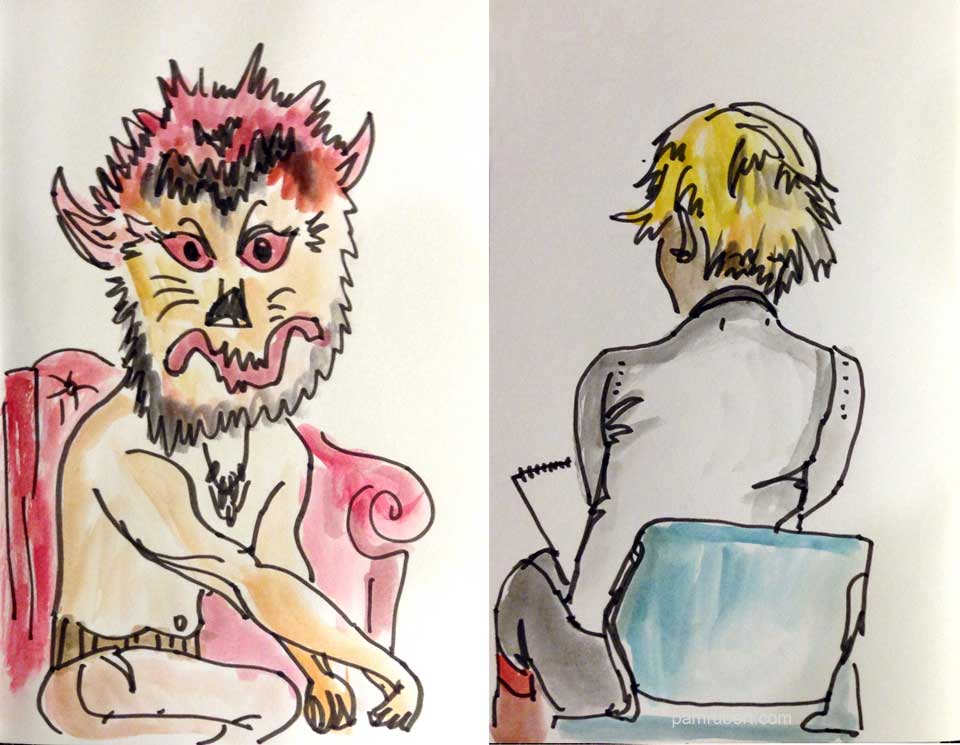 Sometimes I’m completely off topic, as when I noticed on the sidelines, Laura was crocheting in the most graceful way, and I was fascinated watching her hands. 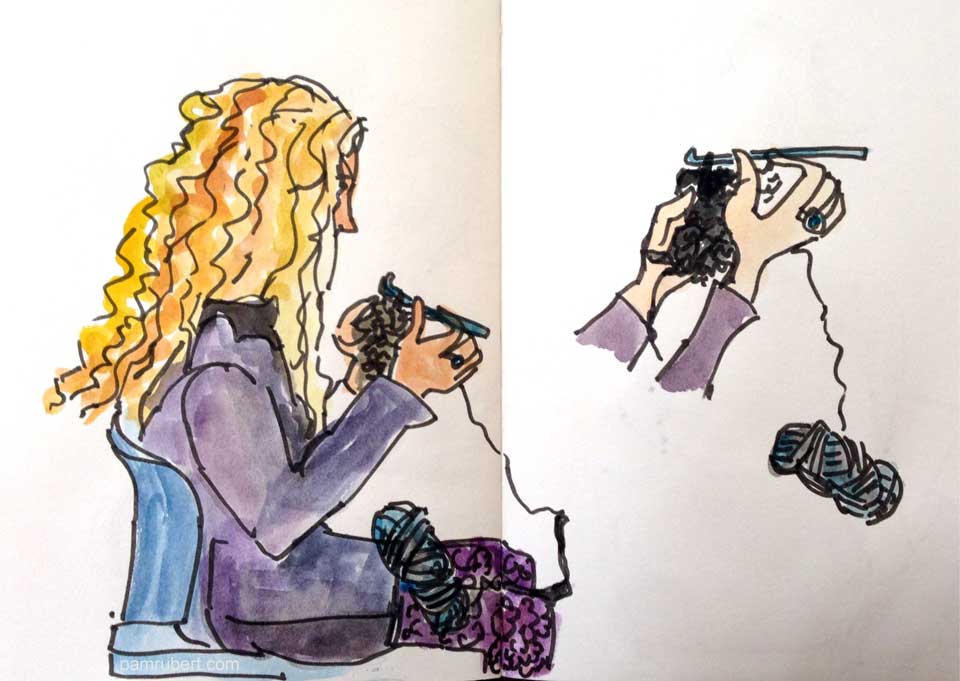 Arts & Letters is Springfield’s newest downtown gallery and eclectic boutique, but one of the co-owners is Meganne Rosen O’Neal who has long been involved in our arts community. I’ve worked with her much over the last year and half on various committees, but most frequently Russ and I have worked her as we created the ideaXfactory and on various PechaKucha Springfield events.

So it seems funny to me that I drew her before I knew her. Several years ago she was one of the people behind this Art Factory 417 alternative figure drawing event that I blogged about several years ago. So even if I had known her, I wouldn’t have recognized her behind the bunny mask!